UNICEF/Alessio Romenzi
Migrants sit on mattresses laid on the floor at a detention centre, located on the outskirts of Tripoli, Libya, Wednesday 1 February 2017.

Despite encouraging signs on the political and humanitarian front, efforts must be sustained and intensified in Libya to avoid further “economic collapse, the breakdown of public services, and more frequent and intense outbreaks of violence”, said the United Nations Special Envoy for the country on Monday.

Ghassan Salamé, was briefing the Security Council by video-link from the capital Tripoli, on the situation in Libya and progress in implementing the UN Action Plan, unveiled during the General Assembly’s session in September 2017, to support the country’s recovery.

“For the first months of this year, Libya enjoyed relative quiet from military actions”, Mr. Salamé stated, highlighting that the number of civilians killed by military action was down to four in March and five in April. “Regrettably, the last two months have been marked by military actions and violent developments,” he added, noting that had exposed “frustrations with regards to the distribution of wealth and the endemic plundering of resources” across the country.

“Concerns remain over human rights abuses, including summary execution and extra-judiciary arrests,” he added, reiterating the call for “all parties to the conflict to fully respect international humanitarian law, including by taking all feasible precautions to protect civilians.”

Since armed conflict erupted in Libya in 2011, close to 200,000 have been internally displaced. Drawing attention to the dire humanitarian situation in Libya, he said: “The current situation of internally displaced people is unsustainable from both a political and financial standpoint, given the lack of available resources to support them. They should be given the right to integrate in their host communities, as efforts are made to facilitate their return.”

Among encouraging developments cited by Mr. Salamé was the holding of local elections in various localities thanks to the support of the UN on the ground; the reestablishment of the UN office in Tripoli and soon in Benghazi; and the launch of a consultative process to ensure the active participation of Libyans in the design of “the future of their nation.”

The Special Envoy said the consultations had “taught us that the Libyan people want clear and effective leadership by legitimate bodies, formed through elections,” adding that “members of the House of Representatives should take notice. Libyans are demanding elections, and are becoming impatient with those who find multiple ways and means to postpone this moment.”

Mr. Salamé urged the members of the Security Council to press parliamentarians “to deliver” on what her termed their “historic responsibility, and achieve this goal in a timely fashion.”

“The status quo in Libya cannot be sustained,” he concluded. “If we are to avert this and support the Libyan people to chart a course to the future they deserve, the unified support of this Council, Member States involved in Libya and our partner regional organisations, is vital.”

Subsequent to the briefing, the Security Council issued a statement on Thursday welcoming the briefing and reaffirming Members’ commitment to Libya’s sovereignty over its national territory and resources.

The Press Statement stressed that the country’s oil resources must remain under the National Oil Corporation’s exclusive control; and that the Government of National Accord exercise’s “sole and effective oversight” over Libya’s economic and financial institutions.

They reminded States of the Council’s condemnation of “the illicit export of petroleum” from Libya, and called on countries to stop supporting or having contact with “parallel institutions” that claim to be the legitimate authority but are outside of the Libyan Political Agreement (LPA).

The Council called on Libya’s leaders “to resolve their differences over the Central Bank of Libya and encouraged their work towards the unification of Libya’s institutions” within the LPA framework.

They also expressed concern over Libyan’s financial freeze as well as at the humanitarian situation, “especially in Derna and including the situation faced by migrants, refugees and internally displaced people,” calling on all parties “to respect applicable international humanitarian law.”

The Council underlined their support for Special Representative Salamé “to facilitate an inclusive Libyan-owned and Libyan-led political process including continued implementation of the United Nations’ Action Plan.” 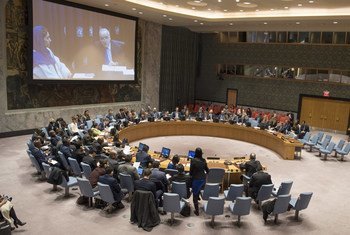 The United Nations is implementing its Action Plan for Libya to create the necessary conditions for the completion of the North African country’s post-conflict transition, the head of UN mission there said Wednesday.