UNMISS/Eric Kanalstein
A child stands behind Ghanaian Peacekeepers at the makeshift camp next to a base of the United Nations Mission in South Sudan (UNMISS) in Leer, South Sudan, where approximately 2,000 civilians have taken refuge from the recent fighting.

The Security Council on Friday narrowly passed a measure aimed at stopping the flow of weapons to armed groups in South Sudan, with those Members in favour saying it would protect civilians, while abstainers voiced concerns that it would undermine the ongoing peace process in the world’s youngest country.

Adopting a resolution by a vote of 9 in favour and none against, with 6 abstentions, the 15-member body obliged all UN Member States to immediately to take necessary measures regarding the arms embargo, that will remain in effect until 31 May next year.

Under the terms of the resolution, all Member States must prevent arms and related equipment of all types - including weapons and ammunition, military vehicles and equipment, paramilitary equipment, and any spare parts - from entering South Sudan.

The Council also renewed the South Sudan Sanctions regime until 31 May 2019 and the Sanctions Committee’s Panel of Experts until 1 July 2019.

The Council also imposed a travel ban and asset freeze against two more individuals accused of fomenting violence, during the long-running civil conflict, which has driven around four million from their homes and left millions in need of humanitarian assistance.

Speaking for the resolution, US Ambassador to the United Nations Nikki Haley said: “If we’re going to help the people of South Sudan, we need the violence to stop. And to stop the violence, we need to stop the flow of weapons to armed groups, that they are using to fight each other and to terrorize the people.”

In 2016, the United States, a Permanent Member of the Council, proposed an arms embargo, but failed to get enough support for it to pass. “Since then, we can only imagine how many weapons made their way to parties in South Sudan, and how many more people had to die,” she argued.

The representatives of Ethiopia and Equatorial Guinea expressed concerns that further punitive measures could undermine the fragile, ongoing peace process in South Sudan.

On 27 June, an agreement was signed by South Sudan’s President, Salva Kiir, and his political rival, former Vice President Riek Machar, which included a ceasefire between government and opposition forces.

Previous efforts to end fighting between the rival forces since 2013, have all failed to hold, leaving tens of thousands of combatants and civilians dead. 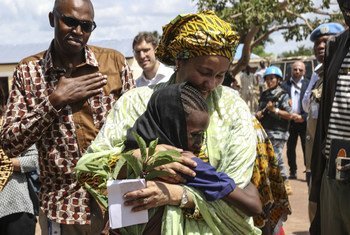