“Small children butchered in front of their parents. Girls and women gang-raped while family members were tortured and killed,” United Nations Secretary-General António Guterres said Tuesday in a Washington Post opinion piece, adding: “Nothing could have prepared me for the bone-chilling accounts.”

The continuing plight of nearly one million Rohingya refugees driven from their homes in Myanmar was the focus of Mr. Guterres’ trip along with Jim Yong Kim, the President of the World Bank Group, during a visit last week to Bangladesh – the country where they have found safe-haven.

Since late August 2017, widespread and systematic violence against Myanmar’s mainly-Muslim minority Rohingya, has forced hundreds of thousands to flee their homes in Rakhine state for Bangladesh’s Cox’s Bazar area, just across the border.

Prior to that, well over 200,000 Rohingya refugees were sheltering in vast, makeshift camps in Bangladesh as a result of earlier displacements.

In his Washington Post opinion piece, the UN chief recalled one Muslim man he met who broke down in tears, describing how his eldest son was shot dead in front of him.

The man’s mother was brutally murdered and his house was torched to ashes. He then took refuge in a mosque but was discovered by soldiers who abused him and burned the Koran.

“These victims of what has been rightly called ethnic cleansing are suffering an anguish that can only stir a visitor’s heartbreak and anger,” continued Mr. Guterres.

“Their horrific experiences defy comprehension, yet they are the reality for nearly one million Rohingya refugees.”

The Rohingya have suffered a pattern of persecution — lacking even the most basic human rights, starting with citizenship — in their native Myanmar.

The Secretary-General explained that systematic human rights abuses by Myanmar’s security forces over the past year were “designed to instill terror in the Rohingya population, leaving them with a dreadful choice: stay on in fear of death or leave everything simply to survive.”

While Bangladesh’s resources are stretched to the limits, wealthier countries are closing their doors to outsiders.

“The Government and people of Bangladesh have opened their borders and hearts to the Rohingya,” Mr. Guterres said, adding that such compassion and generosity “show the best of humanity and has saved many thousands of lives.”

UNHCR/Caroline Gluck
A Rohingya boy walks up steps in a rain-damaged section of the Chakmarkul refugee settlement.

A Global Compact on Refugees is being finalized by UN Member States, seeking to ensure that, among other things, front-line countries, like Bangladesh, are not alone in responding fleeing waves of humanity.

Meanwhile, the UN and humanitarian agencies are working flat-out alongside the refugees themselves and host communities to improve conditions.

“But far more resources are desperately needed to avert disaster and to give fuller expression to the principle that a refugee crisis calls for a global sharing of responsibility,” stressed the UN chief, pointing that only 26 per cent of an $1 billion international humanitarian appeal has been funded.

This shortfall means that malnutrition prevails in the camp, access to water and sanitation is iffy, refugee children are missing basic education and inadequate measures are left to alleviate the monsoon risk.

The crisis will not be solved overnight, yet the situation cannot be allowed to continue indefinitely.

Unless the root causes of the violence in Rakhine state are addressed comprehensively, hatred will continue to fuel conflict.

“The Rohingya people cannot become forgotten victims. We must answer their clear appeals for help with action,” concluded the UN chief. 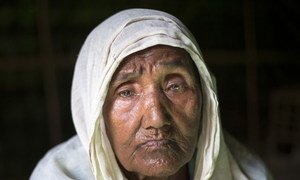