OCHA/Otto Bakano
A family goes in search of water in Burkina Faso where more than 950,000 people are severely food insecure, notably in the conflict-hit northern regions.

“Climate change is inextricably linked to some of the most pressing security challenges of our time,” said Deputy Secretary-General Amina Mohammed during a debate intended to deepen understanding of climate-related security risks.

“Fragile countries are in danger of becoming stuck in a cycle of conflict and climate disaster. Where resilience is eroded, communities may be displaced and exposed to exploitation,” she added.

Ms. Mohammed is just back from her trip to Africa’s Lake Chad Basin with Margot Wallström, Minister for Foreign Affairs of Sweden, which chaired today’s Council meeting.

Where resilience is eroded, communities may be displaced and exposed to exploitation - Deputy Secretary-General

The region is “experiencing a crisis brought on by a combination of political, socio-economic, humanitarian and environmental factors,” Ms. Mohammed explained.

She noted that the drastic shrinking of Lake Chad by more than 90 per cent since the 1960s has led to environmental degradation, socio-economic marginalization and insecurity affecting 45 million people.

Exacerbated competition over scant resources and the vicious cycle of risk and vulnerability have decreased the resilience of populations to cope with humanitarian crises. Declining economic activity and agricultural loss have led to a lack of employment opportunities across the region.

The resulting socio-economic marginalization, she said, has exposed populations, in particular the young, to the risk of violent extremism and provided breeding ground for recruitment by groups such as Boko Haram.

The Boko Haram insurgency in north-east Nigeria and neighbouring countries of Cameroon, Chad and Niger, has left over 10 million people displaced and resulted in massive destruction of basic infrastructure, health and educational facilities, commercial buildings, private houses and agricultural assets.

“The multidimensional nature of this crisis underlines the complex relationship between climate change and conflict,” she stressed.

“We must understand climate change as one issue in a web of factors that can lead to conflict. Within this web, climate change acts as a threat multiplier, applying additional stress on prevailing political, social and economic pressure points,” she added.

The Deputy Secretary-General said that over the last 18 months, the Security Council has also recognized the adverse effects of climate change on stability in other geographical areas, including West Africa, the Sahel and the Horn of Africa.

For example, the Secretary General’s forthcoming report on the UN Office for West Africa and the Sahel will report on recent developments involving the climate-security nexus in the region. The recalibrated UN Integrated Strategy for the Sahel is similarly climate-oriented, she said.

Ms. Mohammed also emphasized the importance of supporting programmes that place women and Youth at the heart of efforts.

“Desertification means women must travel larger distances to fetch water and food, forcing them to miss out on education and economic opportunities in the long term. Youth without jobs will take alternate route to terrorism,” she said.

In conclusion, she warned that climate change is moving faster than responses, urging the Security Council to do its part to help humankind keep pace.

Also addressing the Council was Hassan Janabi, Iraq’s Minister of Water Resources, who said that major river basins in Iraq and the rest of the region are subject to the greatest ever threat, resulting from climate change, as well as competition for shared water resources.

He said the absence of implementable bilateral and multilateral agreements or regional frameworks for the equitable use of shared water is contributing to potential conflicts that could and should be avoided.

Iraq fully supports diplomatic means to solve water scarcity issues, including through “water diplomacy” and similar initiatives intending to maintain the security of the planet with a view to creating an environment of trust and cooperation, he added.

She said that in the Sahel, where 90 per cent of the economy relies on agriculture and pastoralism, a heat wave and drought has the potential to immediately hurt the economy and the people.

At the regional level, she added, climate change contributes to reinforcing terrorist groups as they take advantage of poverty to recruit the youngest and most fragile. 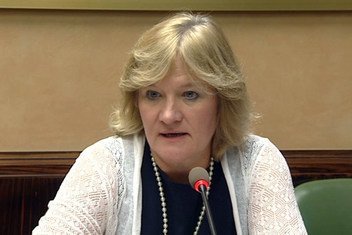