UNICEF/Maxence Bradley
UNICEF and its partners, together with the government of Haiti, have been able to ensure safe water is available daily to over 281,000 individuals, including over 118,000 children, three months after hurricane Matthew struck the country on 4 October 2016.

Progress has been made on achieving global goals to end poverty and hunger but meeting the targets by the deadline of 2030 will require a laser-sharp focus and a true sense of urgency, a key United Nations forum on sustainable development heard on Monday.

“We have only 12 more years to fully realize this transformative agenda, but these goals are absolutely within our reach,” said Liu Zhenmin, UN Under-Secretary-General of Economic and Social Affairs, in his opening remarks.

“It will require policy makers’ unwavering attention, a laser-sharp focus on implementation of these goals, and a true sense of urgency,” he added.

The UN High-level Political Forum on Sustainable Development (HLPF), which will run through 18 July, brings together more than a thousand government, business and civil society leaders.

They will discuss progress already made by dozens of countries towards the Sustainable Development Goals (SDGs) – adopted by 193 Member States in 2015 – in an effort to find out what is and what is not working, based on the UN Secretary-General’s annual progress report.

“It has been three years since world leaders committed to end poverty and hunger, to protect our planet, to foster peaceful societies, and to unleash economic, social and technological progress –and in implementing this vision they committed to reach those furthest behind,” Mr. Liu said.

Many people are indeed living better lives than they were a decade ago, even in regions facing the greatest development challenges. The proportion of the world’s workers and their families now living below the extreme poverty line has declined significantly, from 27 per cent in 2000 to 9 per cent m 2017, he noted.

“However, drought and disasters linked to climate change, and surging conflicts in parts of the world, are hindering faster progress,” he said.

Marie Chatardová, President of the UN Economic and Social Council (ECOSOC), said that achieving the goals requires more than just the “dedication and good will” of governments.

“We explored how civil society, the private sector, academia and other actors can help move the SDGs forward,” she said.

During the Forum, 47 countries will share their experiences, including the successes, challenges and lessons learnt so far.

Ms. Chatardová said she expects that the Declaration – an outcome document to be adopted at the end of the Forum – will encapsulate a strong political message on the international community’s unwavering commitment to realizing the aspirations of the 2030 Agenda.

In the opening day’s keynote speech, Professor Jeffrey Sachs, Director of the Center for Sustainable Development at Columbia University, said that there were enough resources in the world for everyone to live free of poverty and it should not require a big effort on the part of large developed countries, to profoundly help those struggling in poverty.

Presenting league tables produced by his team and the Sustainable Development Solutions Network, he said Sweden was the country most on course to achieving the SDGs, and that Europe is “by far” the region doing best so far.

Moreover, the list of the top 10 countries closest to achieving the SDGs mirrors a complementary ranking of the world’s happiest countries. “It is literally the truth”, that sustainable development is the path to happiness, he said.

The happiest countries are the ones that tax themselves the most, he added, noting that Swedes think it is a good thing to pay half their national income to finance quality education and healthcare.

Under the theme “Transformation towards sustainable and resilient societies”, this year’s Forum focuses on six of the 17 goals:

Goal 6: To ensure availability and sustainable management of water and sanitation for all.

Goal 7: To provide access to affordable, reliable, sustainable and modern energy for all.

Goal 17. To strengthen the means of implementation and revitalize the Global Partnership for Sustainable Development, that will be considered each year.

UN DESA
Are we on track to realize the global goals?
♦ Receive daily updates directly in your inbox - Subscribe here to a topic.
♦ Download the UN News app for your iOS or Android devices. 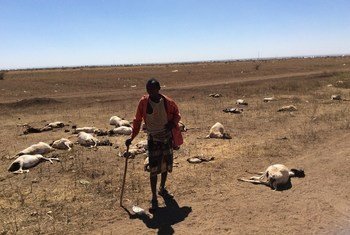 Although more people are leading better lives than a decade ago, persistent poverty and hunger, as well as rapid urbanization, are challenging global efforts to create a more just and equitable world, according to a United Nations report launched on Wednesday.