Kodi Moumdau gave birth last year but her child was stillborn and in the process of delivery a fistula, or tear, developed between her vagina and anus. Fistulas of this type can result in a lack of bowel and urine control, leading to embarrassment and shame amongst women who are suffering the condition.

Speaking in her local language Djerma, Kodi Moumdau explained her fears when the fistula first happened: “When I was pregnant, my legs became paralyzed, so I was rushed to the hospital. My baby was still-born and that is when my body tore.”

Many young women with fistulas are shunned by their communities, as the condition, which can frequently lead to bad odours, is considered by some as dirty.

Kodi Moumdau was fortunate to the extent that she was treated quickly, after being taken directly to a specialist local hospital in Tillaberi region in the north-west of Niger and then onto the National Fistula Centre in Niamey.

Kodi Moumdau is not alone.

In Niger, the incidence of obstetric fistulas is increasing, in line with population growth and the continuing lack of education about the causes of the condition. Child marriage, early pregnancy and female genital mutilation all contribute to the growing number of cases in Niger and across sub-Saharan Africa. The exact number of affected women in the sub-Saharan region is not known, although the United Nations estimates it could be up to one million.

In the National Fistula Centre, one of 11 fistula treatment centres in Niger, there are 69 women who are accommodated in neatly arranged wards in the dusty and parched hospital compound. Of those, 42 are waiting to have the operation to repair the tear to their bodies.

Dr. Abdoulaye Idrissa, the director of the centre, carries out around six operations a week. Dressed in his theatre scrubs or clothes and white coat, he frequently visits the wards. He moves easily between patients, asking them how they feel and exchanging some much-needed light-hearted conversation. He is clearly liked and respected.

“Even if we carry out one operation, we consider that a success,” he told UN News. “But I have to say we have a heavy and difficult task because as the population of Niger increases, so do the needs. We fight to do our best. Each year we increase the number of obstetricians and surgeons on our staff, we open new clinics, so we are able to reach more parts of the country.”

And he recognizes, the causes behind the increase in obstetric fistulas are common to many developing sub-Saharan countries, saying: “The essential factors remain poverty, illiteracy, access to health care services…there are social factors also, like early marriage.”

The average age of patients who he treats is 18, but he frequently sees girls as young as 12 or 13. The risk of a fistula is far greater for young pregnant girls whose bodies are not yet fully formed.

The work of the National Fistula Centre was showcased to a joint high-level visit of the UN and African Union, which spent two days in Niger looking at the issues of women, peace and security and development, as well as empowerment and the importance of getting more women into leadership positions.

These centres are an oasis, a place of sanctuary for girls in early child marriage, who have ended up needing horrendous fistula repairs  – UN Deputy Secretary-General, Amina Mohammed

The health of women is an important part of making sure they are able to fulfill their potential.

UN Deputy Secretary-General Amina Mohammed led the joint delegation to Niger and met patients and doctors at the centre on Saturday.

“These centres are an oasis, a place of sanctuary for girls in early child marriage, who have ended up needing horrendous fistula repairs,” she said, adding “not only are fistulas damaging to their own wellbeing physically and mentally, women are also stigmatized. Within their families and societies, they no longer have a home."

“There are two sides to this," she contiued, "making sure we put more money into the repairs and the work that the doctors do here tirelessly and then also take up the advocacy, because we should be able to prevent and bring zero child marriage to our children in Niger and the rest of Africa.”

This is where a new effort, Spotlight Initiative, a partnership of the European Union and UN, aims to make a difference. A fund in support of the Sustainable Development Goals, and focused on ending all forms of violence against women and girls, the Spotlight Initiative will have a specific focus on early marriage in Africa.

UNICEF Niger/Islamane Abdou
Young girls in the village of Danja in Niger hold a sign in support of the Spotlight Initiative a European Union and UN fund supporting the Sustainable Development Goals.

Niger is one of eight implementing countries selected on the continent. In discussions with the Prime Minister and ministers during the trip, it was clear that the Initiative brought both great hope and expectations - including for significant investments in more centres such as this.

Two months after her operation, Kodi Moumdau is looking forward to returning home and being reunited with her husband. She chats and laughs with her fellow fistula survivors on the bed she has slept in since she arrived from the countryside to where she will soon return, confident that she can resume her life at home.

♦ Receive daily updates directly in your inbox - Subscribe here to a topic.
♦ Download the UN News app for your iOS or Android devices.
fistula|niger

Doctors in Nigeria to get training in treating fistula, UN says 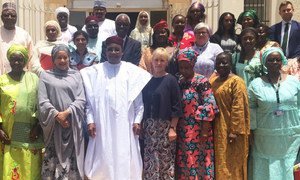 The role of women in leadership positions is critical to the future of a peaceful Niger according to the UN Deputy Secretary-General, Amina Mohammed. 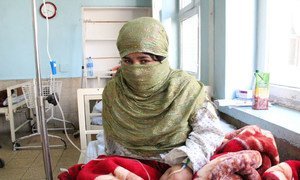 Obstetric fistula has largely been eliminated in developed countries, but more than two million women and girls still live with the condition, the head of the United Nations women's health agency today said, calling for investment and support to eliminate the debilitating and stigmatizing condition.