Conflict and underdevelopment have plagued the area for decades, leaving its children out of school, malnourished and vulnerable to disease, abuse and exploitation.

“Warring parties can and must do more to bring back peace,” she continued, “The children of South Sudan deserve better.”

After gaining independence in 2011, a civil war erupted in 2013 – rendering short-lived the prospect of a better future.

Although 800 children have been released from armed groups since the beginning of the year, an estimated 19,000 others continue to serve as fighters, porters and messengers and to suffer sexual abuse, which is up from 500 since the war broke out.

The proportion of people who do not know where their next meal is coming from jumped from 35 per cent in 2014 to nearly 60 per cent at present, with some areas of the country just one step away from famine, especially during the lean season.

Malnutrition rates are at critical levels, as more than one million children are malnourished, including 300,000 on the brink of death.

With one-in-three schools destroyed, occupied or closed since 2013, the conflict has also left some two million children without an education, earning South Sudan the distinction of having the highest proportion of out-of-school children in the world.

Moreover, efforts to aid those in greatest need are being hampered.

Since 2013, more than 100 aid workers have been killed in the violence, including a driver for UNICEF just last week.

While a massive number of refugees had returned when the country first gained independence,  sinde . However, since 2013, more than 2.5 million, including over one million children, have again fled for safety in neighboring countries.

On a brighter note, the signing of a permanent ceasefire between the two main warring parties in Khartoum last month was a positive step – offering a flicker of hope in what has been a faltering peace process.

“We now count on the leadership and commanders to respect it while ensuring that aid workers are given unrestricted access to those in need,” said Ms. Fore.

Flagging that South Sudan was the first country she visited as UNICEF chief, she concluded by saying: “I saw for myself how harmed children have been by the war. They simply cannot endure anymore.”

♦ Receive daily updates directly in your inbox - Subscribe here to a topic.
♦ Download the UN News app for your iOS or Android devices.
Children|child soldiers 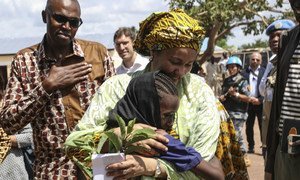