UNFPA Bangladesh/Allison Joyce
Young girls at a Women-Friendly Space at a Rohingya refugee settlement in Cox's Bazar, Bangladesh. The Spaces offer women and girls a safe haven where they can find sanctuary and support.
3 July 2018
Migrants and Refugees

They are offering persecuted Rohingya who fled the brutal violence in Myanmar a safe haven where they can find sanctuary and support, care of UN workers and partner agencies.

Some 19 Women-Friendly Spaces (WFS), also known as women’s centres or women’s safe spaces, set up by the United Nations Population Fund (UNPFA) cater to hundreds-of-thousands of women and girls, providing healthcare and counselling, as well as professional case management for survivors of violence.

However, with the start of the monsoon season, torrential rains and risk of flash floods and landslides, are jeopardizing this vital element of humanitarian response and protection. In June, some 10 such Spaces were damaged by rains and landslides.

“The heavy rains and their impact are already compounding the suffering of these refugees, even as they try to rebuild their lives,” Natalia Kanem, the Executive Director of UNFPA, said on Monday when she was in Cox’s Bazar, as part of Secretary-General António Guterres’ delegation.

Many of the women and girls in need of most care, are survivors of brutal crimes of sexual violence, carried out allegedly by Myanmar government forces, who began torching the villages of Rohingya in Rakhine state last August, forcing them to flee across the border.

UNFPA has already stepped up efforts and is working with partners, including other agencies, including the UN Children’s Fund (UNICEF) and the Office of the UN High Commissioner for Refugees (UNHCR) – together with refugees themselves and host communities - to repair and reinforce these spaces as well and the health centres operated by the agency.

It is also identifying at-risk groups to they can be transferred to safety, forming community watch groups from among refugee and host community women, to locate those who are pregnant – often as a result of rape. Vulnerable women and girls, are taken to more secure settlements or places with facilities designed to help them cope with trauma and loss.

Midwives and case workers, supported by UNFPA are also traveling along waterlogged roads to reach those in need. However, it is feared that full brunt of the monsoon season will discourage women from seeking vital maternal health care and other services.

During the recent first heavy rains, UNFPA health facilities and women-friendly spaces saw their use decline by around 60 per cent.

As a precaution, the UN agency has been distributing sterile delivery kits – which include a plastic sheet, razor blade, gloves and towels – to pregnant women to minimize infection risks during childbirth, in case they are unable to reach a health facility when it is time to deliver. More than 12,000 such kits have been distributed in the past nine months.

UN Secretary-General Guterres, who visited the refugee settlement and the UNFPA facilities on Monday, reiterated the need to protect those in most need.

“The safety of the Rohingya refugees during this monsoon season is priority one,” he said, standing amid a monsoon downpour. 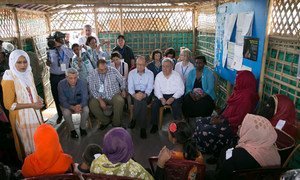 United Nations Secretary-General António Guterres visited Rohingya refugee camps in Bangladesh on Monday, declaring that “nothing could have prepared me for the scale of the crisis and extent of suffering” he witnessed there.