IFAD
A new initiative designed to cut costs and improve cotton yields in India’s Maharashtra state, is helping some of the country’s most vulnerable farmers.
3 July 2018
Economic Development

Poorer countries with rising populations and scarce natural resources are likely to be “increasingly dependent” on imports to feed their people, according to an annual report jointly compiled by the United Nations food agency, launched on Tuesday.

Although overall exports from countries and regions with plenty of agricultural land are forecast to increase, the OECD-FAO Agricultural Outlook 2018-2027 stressed that because agricultural trade plays an important role in food security, there needs to be an enabling trade policy environment.

According to the Agricultural Outlook, undernourishment is concentrated in conflict-riddled and politically-unstable countries – with the Middle East and North Africa (MENA) facing simultaneous challenges of food insecurity, rising malnutrition and managing limited natural resources.

The report forecasts strong growth in agriculture and fishing in developing regions whose populations are rising fast, including Sub-Saharan Africa, South and East Asia and MENA. These areas are facing the challenge of limited land and water resources as well as extreme-weather related issues of climate-change, resulting in high dependence on food imports.

By contrast, this growth is predicted to be significantly lower in developed countries, particularly across Western Europe.

"The Green Revolution of the last century largely increased the world's capacity to feed itself but now we need a sustainability revolution," said José Graziano da Silva, Director General, Director General of the Food and Agriculture Organization (FAO), presenting the report with Angel Gurría,  Secretary-General of the Organisation for Economic Co-operation and Development (OECD).

"This includes tackling high-input and resource-intensive farming systems that impose a high cost to the environment,” he added, noting the continued degradation of soil, forests, water, air quality and biodiversity.

“We need to adopt sustainable and productive food systems that offer healthy and nutritious food, while also preserving the environment and biodiversity," stressed Mr. da Silva.

Elsewhere in MENA, population growth is prompting a rise in food demand where exceptionally high wheat consumption coupled with skyrocketing sugar and fat consumption are leading to what FAO calls “an alarming spread of overweight and obesity.”

FAO/Ami Vitale
Fresh produce for sale at a street market in Giza, Egypt.

Anticipating global improvements in agricultural commodities and food productivity, the report predicts a slide in demand, which will reduce the price of most food staples, over the coming decade.

The report attributes the slowdown to stagnating per-capita consumption of staple foods, a drop in emerging economy consumption, and a gradual decline in global population growth rates.

Moreover, a decline in the desire to buy meat products will put a brake on the demand for cereals and protein meal used in animal feed.

With slower consumption and production growth, agricultural and fish trade are projected to grow at about half the rate of the previous decade.

♦ Receive daily updates directly in your inbox - Subscribe here to a topic.
♦ Download the UN News app for your iOS or Android devices.
agriculture|farming|foods

FROM THE FIELD: Growing potatoes in the air: agricultural innovation in Rwanda 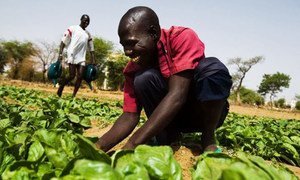 Ensuring that people everywhere can trust the safety and quality of the food they eat is the focus of a UN meeting taking place this week in Rome.