FAO/Olivier Asselin
Smallholders and small family farms produce up to 80% of the food in many developing countries.
2 July 2018
Health

Ensuring that people everywhere can trust the safety and quality of the food they eat is the focus of a UN meeting taking place this week in Rome.

The international food standards body known as the Codex Alimentarius Commission (CAC) is expected to adopt a text on the maximum level of  mercury in fish, among other matters, during its annual session, which opened on Monday.

“One of the greatest challenges the world faces is how to ensure that a growing global population has enough safe food,” Maria Helena Semedo, Deputy Director-General of the UN Food and Agriculture Organization (FAO), told the gathering.

“Food safety is a critical enabler for market access, which promotes economic development and alleviates poverty.”

The Codex Alimentarius Commission was established more than 50 years ago by FAO and the World Health Organization (WHO).

It coordinates input from nearly 190 countries and the European Union, and addresses themes such as contaminants, pesticides, health claims and nutrition labelling.

The Commission meets every year for one week to adopt the standards, guidelines, codes of practice and other recommendations that make up the Codex Alimentarius—Latin for “food code” —aimed at protecting consumer health and ensuring fair practices in the food trade.

Tom Heilandt, CAC secretary, told UN News that mercury in fish and other seafood can be harmful or even deadly to people of all ages.

“We are particularly concerned about the contamination of fish because of contamination of the seas with this heavy metal. It is partially because of natural contamination, meaning that the mercury was in the environment already and then dissolved in the oceans, and partly also because of emissions from industry,” he explained.

“It can also enter into the body, even through the hair, and it is also possible to enter the foetus in a pregnant woman.  And that can be really bad for the baby.”

Representatives from nearly 120 countries and 70 organizations are attending this year’s CAC meeting, which concludes on Friday.

“It is essential we do our best to further develop and disseminate Codex standards in order to ensure food safety and quality for everyone everywhere,” he said.

‘Health is a right, not a privilege’ says WHO chief on World Health Day 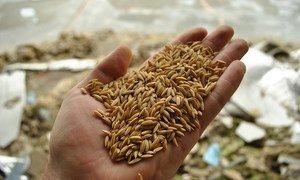 A United Nations standards-setting body today adopted a number of decisions to ensure food safety, including maximum residue limits for a range of drugs used in cattle and other animals, as well as revisions to guidance on agricultural and hygienic practices to minimize microbial, chemical and physical hazards to fresh fruits and vegetables.