United Nations Secretary-General António Guterres visited Rohingya refugee camps in Bangladesh on Monday, declaring that “nothing could have prepared me for the scale of the crisis and extent of suffering” he witnessed there.

Speaking to the press in Cox’s Bazar, the region in southern Bangladesh where nearly one million Rohingya are living under constant threat of flash-floods and landslides, Mr. Guterres said that the violence they had faced at home in Myanmar since last August, was probably one of the most “tragic stories” of “systematic violation” of human rights ever recorded.

“It is unacceptable that these people who have suffered so much in Myanmar now have to live in the difficult circumstances that these camps inevitably represent,” he added.

The UN chief also praised the Government and people of Bangladesh for “generously” receiving the refugees and for providing them with basic protection and support.

At the same time, he also called on the international community to “translate” its solidarity into sufficient support for the minority-Rohingya still living in Myanmar and those displaced across the border in Bangladesh.

“My appeal to the international community is to step up to the plate and to substantially increase the financial support to all those working in Bangladesh to protect and assist the Rohingya refugees,” urged Mr. Guterres.

He also said that the UN will continue to insist on the voluntary “right of return” of the Rohingya to their homes in Myanmar, but “only when the conditions are there for them to live in full dignity.”

Mr. Guterres arrived in Bangladesh on Sunday early morning local time, to draw attention to the plight of the Rohingya refugees as well as to impress the need on the international community to do more to support them.

The UN chief was accompanied by the World Bank Group President, Jim Yong Kim, which on Friday announced nearly $500 million in grant-based support to help Bangladesh address the needs of refugees.

Speaking alongside Mr. Guterres at the press conference, Mr. Kim called on everyone to “stand in solidarity” with the Rohingya so that they can live a life of dignity, as well as with “their demand for such basic things that just about everyone else in the world enjoys.”

“We as the World Bank Group are committed to doing more and more to make sure that the Rohingya … get some justice,” he declared. 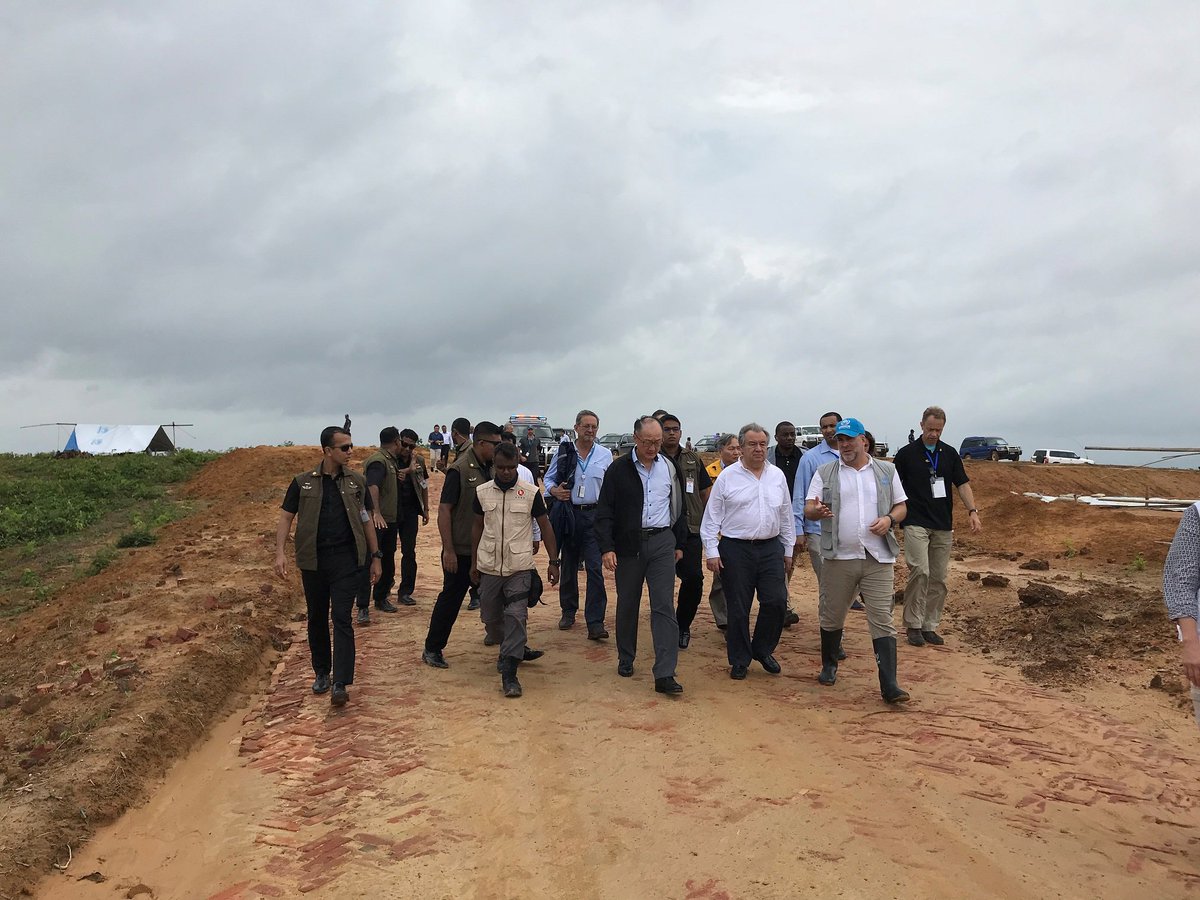 The complex Rohingya refugee crisis erupted last August following attacks on remote police outposts by armed groups alleged to belong to the community. These were followed by systematic counter attacks against the minority, mainly Muslim, Rohingya, which human rights groups, including senior UN officials, have said amounted to ethnic cleansing.

In the weeks that followed, over 700,000 Rohingya – the majority of them children, women and the elderly – fled their homes for safely in Bangladesh, with little more than the clothes on their backs.

Prior to the latest exodus, well over 200,000 Rohingya refugees were sheltering in Bangladesh as a result of earlier displacements.

UN agencies and humanitarian partners have been on the ground, responding to the needs of both the refugees and communities hosting them. However, their efforts have often been overwhelmed by the sheer scale of the crisis and extreme weather.

One of the most pressing challenges is the monsoon season which brings torrential rains as well as the threat of cyclones, landslides and flash-floods.

“The heavy rains and their impact are already compounding the suffering of the refugees, even as they try to rebuild their lives,” said Natalia Kanem, the Executive Director of UN Population Fund (UNFPA), who was part of the Secretary-General’s delegation.

She also applauded the support extended by the host communities.

“We pledge to continue to do all we can to provide life-saving services for women and girls within the refugee population as well as the host communities who have been so generous in welcoming the Rohingya people,” added Dr. Kanem.

In addition to the weather, severe lack of resources has also hampered the humanitarian response. A Joint Response Plan, launched by the UN in March, urging $951 million to provide life-saving assistance the refugees and host communities remains only 18 per cent funded.

Against this backdrop, the support announced by the World Bank will help improve the conditions and step up the assistance from a “purely humanitarian and day-to-day to medium-term and developmental” response, said UN High Commissioner for Refugees Filippo Grandi, who was also in Cox’s Bazar as part of the high-level delegation.

“We are really counting on these additional resources, and perhaps more resources that the Secretary-General and President of the World Bank will be able to mobilize in the future, to stabilize the conditions and create durable solutions,” said the UNHCR chief.

Alongside UNFPA and UNHCR, the whole of the UN system remains engaged in ensuring refugees and host communities have access to much needed aid and protection.

On the ground in Cox’s Bazar, the humanitarian response is being coordinated by the Inter-Sector Coordination Group (ISCG), which is led jointly by the UN Refugee Agency, UNHCR, and the UN International Organization for Migration (IOM).

Other agencies, such as the UN Children’s Fund (UNICEF) and the UN World Food Programme (WFP) are taking the lead in the protection of children and emergency nutrition, respectively.