On the 50th anniversary of the opening for signature of the Treaty on the Non-Proliferation of Nuclear Weapons (NPT), United Nations Secretary-General António Guterres urged all State parties to ensure the Treaty’s continued strength and importance in the years ahead.

In a statement by his spokesperson, Secretary-General Guterres said that the NPT is an “essential pillar” of international peace and security, and the “heart” of the nuclear disarmament and non-proliferation regime.

“Its unique status is based on its near universal membership, legally-binding obligations on disarmament, verifiable non-proliferation safeguards regime, and commitment to the peaceful use of nuclear energy,” he highlighted.

In the statement, Mr. Guterres also welcomed the joint statement by the NPT’s depositories – Russia, the United Kingdom and the United States – including their recommitment to the elimination of nuclear weapons, a central priority of his agenda for disarmament, Securing our Common Future, which he unveiled in May.

The NPT is a landmark international treaty whose objective is to prevent the spread of nuclear weapons and weapons technology, to promote co-operation in the peaceful uses of nuclear energy, and to further the goal of achieving nuclear disarmament.

NPT entered into force in 1970 and in May 1995, it was extended indefinitely.

In 2020, the review conference of the Treaty will be held, during which the States parties will examine the implementation of its provisions. 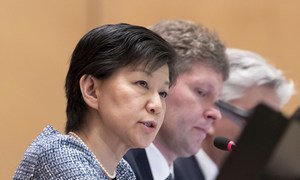 The United Nations disarmament chief said on Monday that the world today faces similar challenges to the context that gave birth to the Treaty on the Non-Proliferation of Nuclear Weapons (NPT), and that the threat of use of nuclear weapons is growing.