UNRWA
A group of Palestinian children celebrating the launch of UNRWA's Dignity is Priceless campaign.
29 June 2018
Peace and Security

Reports of the indignities faced by people in the Occupied Palestinian Territory have “painted the bleakest picture yet” of the human rights situation there, a United Nations expert has said.

Special Rapporteur Michael Lynk was in Amman, Jordan, this week where he met with civil society and other representatives to gather information for his latest report, which will be presented to the General Assembly in October.

Mr. Lynk monitors the human rights situation in the Occupied Palestinian Territory but has been prohibited by Israel from travelling there.

“This is my third mission to the region since I assumed the mandate in May 2016, and the reports I received this week have painted the bleakest picture yet of the human rights situation in the Occupied Palestinian Territory,” he said in a statement issued on Friday.

The rights expert listed concerns such as Israeli settlement expansion in the West Bank and the ongoing crisis in Gaza.

The reports I received this week have painted the bleakest picture yet of the human rights situation in the Occupied Palestinian Territory - Michael Lynk, Special Rapporteur

“After years of creeping Israeli de facto annexation of large swathes of the West Bank through settlement expansion, the creation of closed military zones and other measures, Israel appears to be getting closer to enacting legislation that will formally annex parts of the West Bank.  This would amount to a profound violation of international law, and the impact of ongoing settlement expansion on human rights must not be ignored,” he said.

Mr. Lynk also reported that the situation continues to worsen in Gaza, which has been crippled by a blockade for more than a decade.  Furthermore, an electricity crisis that began last June has yet to be resolved.

“Residents are deprived of their most basic rights, including the rights to health, to education, and most recently, in attempting to exercise their right to freedom of expression and peaceful assembly, they were deprived of the right to life,” he said, referring to recent demonstrations along the border fence, in which more than 100 Palestinians were killed and thousands wounded.

The UN expert was also worried about how funding cuts will affect the work of UNRWA, the UN agency that assists Palestinian refugees.

Nearly one million people in the Occupied Palestinian Territory depend on it for health care, education and social servic

♦ Receive daily updates directly in your inbox - Subscribe here to a topic.
♦ Download the UN News app for your iOS or Android devices.
Occupied Palestinian Territories|Israel-Palestine 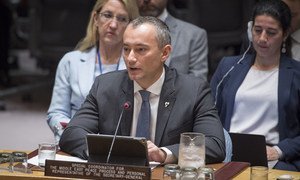 A senior United Nations official on Tuesday urged Israel to reverse course over illegal settlement construction on occupied Palestinian land, and for both parties to return to the negotiating table in pursuit of a lasting peace deal. 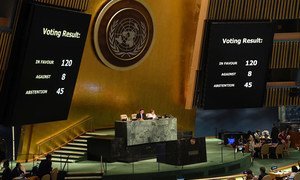 In an emergency meeting on Wednesday, the United Nations General Assembly adopted an Arab-sponsored resolution calling for greater protection for Palestinians, and deploring any use of “excessive, disproportionate and indiscriminate” force by the Israeli military against Palestinian civilians, particularly in Gaza.