The complex and evolving nature of terrorism necessitates a response that is as agile and multifaceted as the threat itself, the United Nations Secretary-General said on Thursday.

Addressing a high-level conference on counter-terrorism, Secretary-General António Guterres underscored that working together must be the “top priority.”
“We must strengthen the capacities of our counter-terrorism structures and institutions and we must complement our counter-terrorism efforts in the security realm with concerted efforts to identify and address the root causes.”
He also highlighted the need to strengthen resilience and build cohesion in societies.

“Communities and the State need to be joined with the common purpose of rejecting terrorist ideologies and challenging those who espouse them,” stated the UN chief.

Terrorism is a grave and complex threat. Ending it demands that we work together flexibly, intelligently and openly – Secretary-General Guterres

Support should also be provided to civil society which has a major role to play in preventing violent extremism and there should be more engagement with women and young people, so they can play “meaningful roles” in combatting the scourge, he added.

Mr. Guterres also cautioned that the “frontline” against terrorism is increasingly in cyberspace, with terrorists exploiting social media, encrypted communications and the so-called “dark web” to spread propaganda and coordinate attacks.

There has also been a shift towards “less sophisticated attacks” against “softer targets” that are more difficult to detect and prevent, he said; noting that following military defeat in one region of the world, foreign terrorist fighters are likely to move elsewhere – either returning home or relocating to other conflict zones.

The transnational nature of terrorism “means we need multilateral cooperation,” he highlighted.

“Terrorism is a grave and complex threat. Ending it demands that we work together flexibly, intelligently and openly,” said Mr. Guterres.

In his remarks, the Secretary-General outlined the goals of the conference.

She, however, added that there are many “potential barriers” to sharing information at the national, regional or international levels, but the “central issue” is trust.

“No-one will share information without trust, or if they believe that doing so may have negative consequences. That is why it is imperative to respect human rights when sharing information,” she said.

In her remarks, Ms. Coninsx also spoke of the importance of cooperation at all levels as well as of the full and effective implementation of laws and policies by competent State officials. 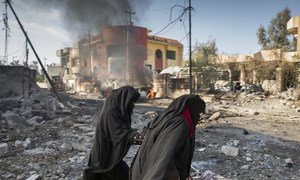 While there is no “one-size-fits-all” solution to address the challenges posed by terrorism worldwide, international cooperation is key to counter the scourge, the President of the United Nations General Assembly said on Tuesday, as the body adopted a review of the UN’s global counter-terrorism strategy.