World Bank/Dominic Chavez
A mother helps her children get ready for bed in Bangladesh. October 2016.

A “global care crisis” is looming which could affect 2.3 billion people by 2030, United Nations work experts warned on Thursday, highlighting the potential for greater inequality in a sector where women already perform “more than three-quarters” of all unpaid work.

In a call for sweeping policy changes regarding the care of children and the elderly, the report by the International Labour Organization (ILO) says that 269 million jobs could be created in the next 12 years, if Member States doubled current investment in education, health and social work.

The potential impact could be huge, with 16.4 billion hours per day already spent in unpaid care work, according to the report, which cites data from 64 countries, representing two-thirds of all workers.

This is the equivalent of two billion people “working eight hours a day with no remuneration”, it notes, explaining that of the 2.1 billion people in need of care in 2015, 1.9 billion were children under 15 and the remainder were older persons.

Across the world, women perform 76.2 per cent of the total hours of unpaid care work and over three times more than men -  Shauna Olney (ILO)

The data also highlights a huge gender gap in the care sector, ILO’s Shauna Olney told journalists in Geneva, explaining that “across the world, women perform 76.2 per cent of the total hours of unpaid care work and over three times more than men”.

This equates to “606 million women, compared to 41 million men” being unavailable for employment, or not seeking a job, because of unpaid care work, Olney said – “a key factor” in determining whether women “enter into and stay” in employment, as well as important in determining the quality of paid jobs they get.

One of the report’s other key findings is data showing that mothers of children under six years old have the most difficulty finding a job, with fewer than half of them able to secure paid work.

This tallies with the discovery that only 77 countries out of 184, with available data, met minimum maternity protection standards in 2016, while even fewer had any paternity leave provision for fathers.

This is linked to the “very much engrained” belief in many societies that men are the household’s sole breadwinner, and that women are the principal carers, the report says.

It also points to the regional finding that long-term care services “are close to non-existent” in most African, Latin American and Asian countries.

Insisting on the need for reform to address current “deficits in care work and its quality” - particularly in countries where women’s employment opportunities are growing – the ILO report finds that in the few countries where men’s contribution to care work is increasing, it is happening slowly, at a “glacial rate”.

“At this pace, it will take 210 years to close the gender gap in unpaid work”, even in the 23 countries where men’s contribution to the care sector has increased in the past two decades, Shauna Olney said. 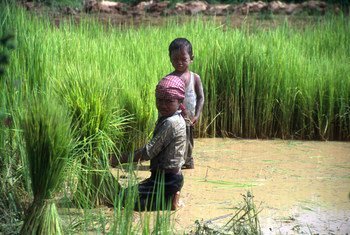 No child under the age of 18 should be toiling in mines, fields, factories and homes, carrying heavy loads or working long hours, the head of the UN labour agency said on Tuesday, marking World Day against Child Labour. 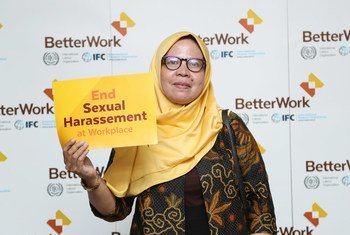 The head of the United Nations labour agency has called for a new spirit of cooperation and consensus between workers, employers and Governments, to end what he called the “new brutalism” of sexual harassment and violence in the workplace.