Defence and security forces along with the Kamuina Nsapu and Bana Mura militias have committed “crimes against humanity and war crimes” in the of the Democratic Republic of the Congo’s Kasai region, United Nations experts said on Tuesday following an investigation.

“We are shocked by this disastrous situation that has claimed the lives of several thousand people and continues to rage in the region, without provoking national or international attention,” said Bacre Waly Ndiaye, President of the Team of International Experts appointed by the Human Rights Council.

The experts believed that following an upsurge in violence, which has swept the Kasai region since 2016, civilian killings, including children, and atrocities – such as mutilations, rapes and other forms of sexual violence, torture and exterminations – were committed in a generalized and systematic fashion, constituting crimes against humanity.

“It is high time for justice to put an end to impunity if we do not want the ethnic dimension of the conflict to worsen,” he added.

The experts revealed that two years after the conflict began, the crimes and destruction continue – resulting in some 1.4 million people internally displaced, and another 35,000 who have fled to Angola. Women have been enslaved and some abuses may also amount to ethnic persecution.

While warning of an alarming humanitarian situation that has been particularly harsh on children, the team flagged that the Kamuina Nsapu militia also recruited boys and girls.

According to the World Food Programme and the Food and Agriculture Organization, about 3.2 million people continue to be severely food insecure, and malnutrition rates, especially for children, are high.

Among other recommendations, the experts demanded that the militias be disarmed and that a reconciliation process be implemented to avoid another wave of violence and allow the return of the displaced and refugees.

They emphasized that the responsibility to prosecute those guilty of international crimes – and to end the impunity that persists – lies first and foremost with the Congolese authorities.

The team proposed that the capacity of military investigative entities be built up so that the perpetrators of the international crimes committed in Kasai since 2016 – including by officials in the highest positions – can be investigated and prosecuted.

It also called for proper care to be provided to the survivors of rapes and sexual violence.

Meanwhile, the Prosecutor of the International Criminal Court, which is already investigating the situation, has expressed her concern about the acts of violence committed in the Kasai region and that she intends to monitor the situation closely.

♦ Receive daily updates directly in your inbox - Subscribe here to a topic.
♦ Download the UN News app for your iOS or Android devices.
DR Congo|Democratic Republic of Congo 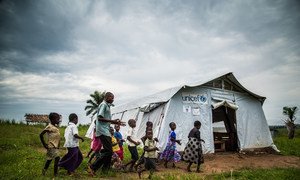 400,000 children in the Democratic Republic of the Congo (DRC) “are at risk of death” in the Kasais region from food shortages caused by conflict and displacement, according to a senior UN official who has just returned from the area, expressing shock at what he had witnessed.