Secretary-General António Guterres condemned the act of violence, which – according to news reports - Prime Minister Abiy Ahmed, described as “an unsuccessful attempt by forces who do not want to see Ethiopia united”.

Earlier this week, the UN chief welcomed the “positive steps” taken by Mr. Ahmed to accept and implement a stalled 2002 peace agreement with neighbouring Eritrea, which would end decades of conflict and tension between the two Horn of Africa countries.

The Ethiopian leader was reportedly escorted from the major political rally in the capital, Addis Ababa, shortly after the blast, which resulted from a grenade being thrown into the crowd.

Mr. Abiy became Prime Minister, following the resignation of his predecessor in February, and is the first leader to hail from the majority Oromo ethnic group, which has been at the centre of anti-government protests for the past three years.

A statement from the Spokesperson of the Secretary-General said that “he conveys his condolences to the families of the victims and wishes a speedy recovery to those injured,” adding that the UN chief “expresses his solidarity with the Government and People of Ethiopia.”

The Ethiopian Prime Minister has implemented a large number of political reforms since taking office, and previously served in government as minister for science and technology.

The United Nations human rights chief on Thursday expressed hope that Ethiopia continues its economic development in which human rights are respected and people can freely speak their minds about public policies. 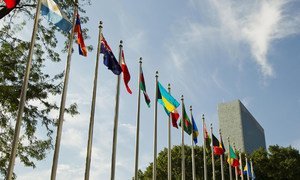 The United Nations on Friday took note of the recent decision by the Prime Minister of Ethiopia, Hailemariam Desalegn, to resign, to ‘allow further political reforms to take place in the country aimed at widening democratic space,’ and welcomed the Government’s expressed intention to follow through with governance reforms.