UN Women/Ryan Brown
A 38-year-old widow who lost her husband in the Central African Republic war escaped to the Ngam refugee site in the Adamawa region of Cameroon with her five children; one of whom recently died.

The loss of a spouse or partner is often devastating, but for many women it is magnified by a “long-term struggle” for basic needs, human rights and dignity, according to UN Women, in a message to mark International Widows’ Day.

On its website dedicated to the Day, the United Nations calls the abuse of widows and their children “one of the most serious violations of human rights and obstacles to development today.”

“We must consider both the vital role widows play in our society, the ways in which gender inequality impacts their ability to thrive on their own, and the specific recognition and attention that they need from all of us,” underscored Phumzile Mlambo-Ngcuka, Executive Director of UN Women in her message for the Day.

Across a wide range of countries, religions and ethnic groups, when a woman’s husband dies, she is left destitute – often illiterate or uneducated with no access to credit or other economic resources – rendering her unable to support herself or her family, according to the UN.

According to UN Women’s 2018 Turning Promises into Action: Gender Equality in the 2030 Agenda for Sustainable Development, nearly one-in-ten of the estimated 258 million widows globally live in extreme poverty – with little or no input to policies impacting their survival.

“When widows with young children lose property, income and other assets—especially in the absence of support for unpaid care work—they may be forced to take their daughters out of school to work or help take care of siblings and housework,” continued Ms. Mlambo-Ngcuka.

“This is how gender inequality perpetuates itself, continuing the cycle of disadvantage for girls and women for decades to come,” she added.

In 2010 the General Assembly set aside 23 June each year to pay tribute to the millions of living spouses who endure extreme poverty, ostracism, violence, homelessness and discrimination.

While violence against women is one of the most widespread violations of human rights, widows may be at particularly high risk.

In many countries widows find themselves the victims of physical and mental violence – including sexual abuse – related to inheritance, land and property disputes.

Moreover, they often endure poor nutrition, inadequate shelter and vulnerability to violence – combined with a lack of access to health care. Although they are frequently rape victims and, through economic insecurity, sometimes driven to sex work, their gynecological needs often go unaddressed.

Ms. Mlambo-Ngcuka highlighted that to empower women, barriers to justice must be removed and social stigma norms tackled.

“On this International Widows’ Day, let us remember that widows are heroes, working hard to keep families, communities, and societies together following the loss of their spouses,” said the UN Women chief.

“As societies we owe it to the widows of the world to give them the respect, visibility and unique support they need,” she concluded.

Ensure that widows are ‘not left out or left behind’, UN chief urges on International Day 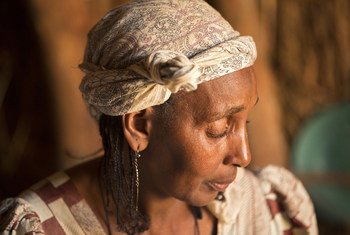 On International Day, UN says widows' rights to independent life, livelihood after loss must be ensured

23 June 2017
Whether they are single, married, separated or widowed, women must be able to enjoy the inviolable right that they are not dependent on anyone, the United Nations has said, marking International Widow's Day.