“Alarming pushbacks have been progressing across regions of the globe”, through what the Working Group on Discrimination against Women in Law and in Practice described as “alliance of conservative political ideologies and religious fundamentalisms,” in its report to the Human Rights Council in Geneva.

“Practices such as polygamy, child marriage, female genital mutilation, so-called honour killings, and criminalizing women for sexual and reproductive behavior, have no place in any society,” said a statement from the working group, adding that “there is no acceptable justification for waiting for the elimination of discrimination against women.”

The expert panel also noted positive changes, including the recent Irish referendum to repeal a near-total constitutional ban on abortion.

“Through popular vote as well as legislative and judicial actions, efforts are being made, in particular to secure reproductive rights, which is encouraging in a global context of retrogressions in this area” the experts said.

Moves in certain countries to eliminate the gender pay gap and strengthen laws criminalizing rape and sexual violence are also “key successes in the struggle to eliminate discrimination against women,” they continued.

Of the “many obstacles” that women face, the UN report contends that family, culture and sexual and reproductive health “remain the most significant challenges” with “the biggest backlash”.

For 70 years, women’s equality has been enshrined in the Universal Declaration of Human Rights; nearly 40 years ago the Convention on the Elimination of All Forms of Discrimination against Women was adopted; and 25 years ago, on Monday, the Vienna Declaration and Programme of Action established that women’s rights are an indivisible part of human rights.

However, the experts spelled out: “No country in the world has successfully eliminated discrimination against women or achieved full equality”.

“This should not be tolerated or normalized. There is an urgent need to protect past gains, and move forward to secure equality for women everywhere,” they stressed.

The experts applauded women human rights defenders globally, and urged the international community to move forward on gender equality and guard against what is described as the current backlash.

The UN Working Group on discrimination against women in law and in practice was created by the Human Rights Council in 2011. 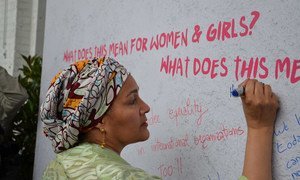 The launch of a new partnership between the United Nations and European Union, is an essential tool to make violence against women and girls “a thing of the past”, said UN Deputy Secretary-General Amina Mohammed on Tuesday.