UNICEF/Sebastian Rich
A pastoralist in northern Somalia, a region hit hard by drought. He lost almost half of his sheep flock that originally numbered 70.
20 June 2018
SDGs

Although more people are leading better lives than a decade ago, persistent poverty and hunger, as well as rapid urbanization, are challenging global efforts to create a more just and equitable world, according to a United Nations report launched on Wednesday.

The study provides a snapshot of progress towards achieving the 17 Sustainable Development Goals (SDGs), adopted by world leaders nearly three years ago.

“With just 12 years left to the 2030 deadline, we must inject a sense of urgency,” UN Secretary-General Antonio Guterres said in a forward to the report.

The Sustainable Development Goals Report 2018 reveals that conflict and climate change were major contributing factors to increased hunger and forced displacement, among other challenges.

For the first time in more than a decade, the number who are not getting enough to eat is trending upwards, and there are now approximately 38 million more hungry people in the world: rising from 777 million in 2015, to 815 million a year later.

Meanwhile, conflict is now one of the main drivers of food insecurity in nearly 20 countries.

The report also points out some good news, such as the significant decline in the number of people living on less than two dollars a day.

The mortality rate for children under-five also has dropped, by almost 50 per cent in the world’s least developed countries.

However, dark spots remain, such as the 2.3 billion people who still lack basic sanitation, while more than 890 million worldwide continue to practice open defecation: that is, using the bathroom outdoors.

And whereas there were 210 million cases of malaria in 2013, the number jumped to 216 million just three years later.

Francesca Perucci, Assistant Director of the UN’s Statistics Division, with the Department of Economic and Social Affairs (DESA), also pointed to the importance of timely data collection and analysis to monitor progress.

“The report highlights the need for political leadership, adequate resources and commitment to further expand on tools available for data collection, production and dissemination, to ensure that all countries have rigorous evidence and comprehensive data to guide programmes and efforts towards 2030,” she said. 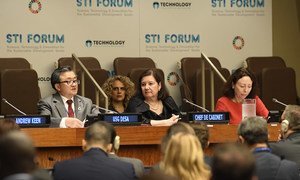 If everyone is to enjoy a future of peace, dignity and opportunity, then science, technology and innovation need to be at the heart of the race to reach the 17 Sustainable Development Goals by 2030, a Forum at UN Headquarters heard on Tuesday. 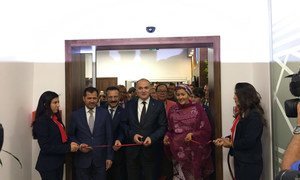 The United Nations on Monday welcomed a new member of the family, which will help address the development challenges of the world’s poorest countries through science, technology and innovation,  while also marking a significant milestone for the whole 2030  Sustainable Development Agenda.