The siege of eastern Ghouta in war-torn Syria, which lasted more than five years, has been labelled “barbaric and medieval” — “amounting” to war crimes, and crimes against humanity, a high-level UN inquiry said on Wednesday.

In a 23-page report on the siege mounted against the densely populated suburb close to the capital Damascus, the Independent International Commission of Inquiry on the Syrian Arab Republic details the events that led to its recapture by pro-Government forces in April this year, following a “dramatically escalating” military campaign.

Neighbourhoods suffered aerial and ground bombardments “which claimed the lives of hundreds of Syrian men, women and children”, the report notes, with “numerous homes, markets and hospitals all but razed to the ground”.

These indiscriminate, “widespread and systematic bombardments” and the act of deliberately attacking protected objects, amounted to war crimes, it continues.

Commenting on the events in eastern Ghouta, Commission of Inquiry Chair, Paulo Pinheiro, condemned the civilian deaths as “abhorrent”.

In addition to the deadly violence they faced, families were denied food and medicine, the veteran rights expert noted, before adding that “no warring party acted to protect the civilian population” during the last phase of the siege.

According to the report, between February and April this year, besieged armed groups and terrorist organizations based inside eastern Ghouta “relentlessly fired” unguided mortars into Damascus city and nearby areas, “killing and maiming” hundreds of Syrian civilians.

Insisting that “there can be no justification” for the indiscriminate shelling of inhabited areas, Commissioner Hanny Megally said that this, too, amounted to a war crime.

According to the report, by the time Government forces declared eastern Ghouta recaptured on 14 April, some 140,000 individuals had fled their homes and up to 50,000 were evacuated to Idlib and Aleppo governorates.

“Tens of thousands” of people have been unlawfully interned by Government forces in what the report’s authors call “managed sites” in rural Damascus, which includes Ghouta.

The report is scheduled to be formally presented next week, on 26 June, during an interactive dialogue at the current session of the Human Rights Council. 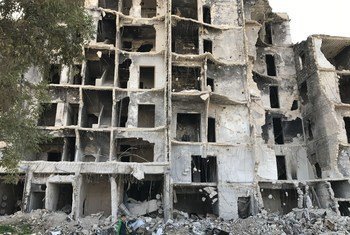 The brutal conflict in Syria has not only claimed civilians as unintentional victims but has seen all warring parties deliberately target them with complete impunity employing unlawful methods of warfare, a new report by a United Nations-mandated inquiry on the war-ravaged country has said.