UNHCR/Markel Redondo
Genesis Cerrato, 16, with her one-year-old son. Along with her whole family, she fled Honduras escaping violence in her home country.

In an appeal to the US regarding its recent policy change cracking down on migration at the border with Mexico, Executive Director Henrietta Fore said in a statement that children who were in need of international protection “have the right to be protected…and be with their families”.

She underlined how for decades the US Government had provided support to “uprooted children” from Syria or South Sudan, Somalia, or Haiti, before warning that detention and family separation can create “toxic stress” which can impact on children's long-term development.

Ms Fore added that any youngsters forced to flee their homes should have access to essential services and be with their families, since this gave them “the best chance at a healthy, happy and productive future”.

Echoing that message, UNICEF spokesperson Christophe Boulierac, in Geneva, said that immigration and children’s rights were not incompatible.

He told journalists: “I think our main role here is to make the point… that what’s happening is not right and, and, more than that, immigration enforcement and protecting the right of children are not a zero-sum game.”

Research showed that taking children into custody without their parents had an “immediate” and negative effect on their wellbeing, Mr Boulierac said.

He highlighted research which showed that children who have not seen a parent for one month after the parents’ arrest “experience more frequent changes in sleeping habits, anger and withdrawing from their family”, compared with children who had seen their parents within the same period following their arrest.

Responding to journalists’ questions, Mr Boulierac confirmed that the US is the only country which has signed but has yet to ratify the UN Convention of the Rights of the Child.

He cited Article 9 of the international accord, which specifies that a child “shall not be separated from his or her parents against their will” except after judicial review and only if it is “necessary for the best interests of the child”.

On the same issue the UN Migration Agency IOM said that it agreed “almost 100 per cent” with the UNICEF statement.

“We feel in general no migrant should be detained for being a migrant,” IOM spokesperson Joel Millman said, before adding that there was “no appropriate reason to detain or jail children”. 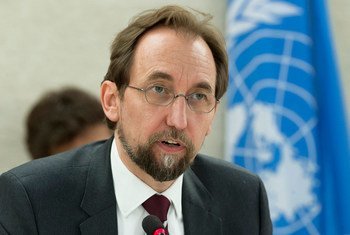 As part of his final global update, the United Nations human rights chief on Monday voiced his deep concern over recently-adopted United States border protection policies that have seen hundreds of migrant children forcibly separated from their parents.