UNICEF/Romenzi
Women and children walk through the debris of buildings and vehicles destroyed during intense fighting as they flee for safe areas in Mosul, Iraq.
18 June 2018
Humanitarian Aid

Mosul was liberated by an Iraqi government-led coalition last July, just over three years after the Islamic State of Iraq and the Levant, ISIL (also known as Da'esh) seized Iraq’s second city, and following an intense battle which lasted for months.

“This is the worst devastation I have seen in all my years with UNHCR,” Ms. Jolie lamented, which is saying a lot, considering that this is her 61st mission – and fifth to Iraq – since she started representing the agency in 2001.

She arrived in the city on the second day of Eid al-Fitr, the Muslim holiday marking the end of Ramadan. After walking among the bombed-out buildings and meeting families beginning to return, she urged the world not to forget their agonies nor ignore the struggles they continue to face.

“These people have lost everything, and the trauma and the loss that they have suffered is unparalleled,” the Special Envoy said in front of the ruins of al-Nuri Mosque in the Old City.

She marveled at the ability of residents to carry on: “I have no words for the strength it must take to rebuild after loss like this,” Ms. Jolie asserted. “They are clearing their homes with their own hands, and volunteering and helping each other. But they need our assistance,” she added.

One local family showed Ms. Jolie the damage to their ancestral home, built a century ago. Mohamed, 47, spoke of how he was born and married there, and how a mortar tore through the roof one morning last June, gravely injuring his 17-year-old daughter. When they carried her to get medical care, he said, they were turned away and she bled to death.

“I want to rebuild the house and come back here,” Mohamed said. “Even if I have painful memories in this house, where else would I go? I have to come back home.”

Throughout Mosul, some 40,000 homes need rehabilitation. UNHCR and its partner, Human Appeal, have begun providing cash assistance to the returning families who are overwhelmed by the lack of shelter, infrastructure, services and jobs – at risk for sliding deeper into poverty.

In the al-Zanjely district, Ms. Jolie met Hassan, a 33-year-old vegetable vendor who spoke of losing his home twice: first when militants confiscated it, and then when an air strike reduced it to rubble. He finished the first phase of rebuilding, in time for Eid, erecting several new walls, windows and doorways. Soon he will begin work on the roof, he told UNHCR.

He, his wife and their three young children now rent space in a modest house with another family and the children are back in school.

“This is my country, my people, my neighbours. Why would I go? One doesn’t leave his home.” Hassan said.

Such resolve may be a crucial element in building a stable future in Mosul, Iraq and the region. But people like Hassan will need more support from a world that has turned its eyes away.

“It is deeply upsetting,” Ms. Jolie said, “that people who have endured unparalleled brutality have so little as they try, somehow, to rebuild the lives they once had.” 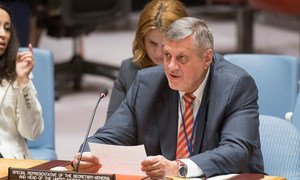 The low voter turnout for Iraq’s recent national elections was a “strong signal” to the country’s ruling political elites that they must work harder to ease sectarian divides and promote democratic accountability over nepotism and patronage, the United Nations envoy to the country said on Wednesday.