Though the past 12 months had been the most encouraging in terms of advancing the peace process in Mali, security challenges still pose a dangerous threat, with civilians and security forces still being attacked, the top United Nations peacekeeping official told the Security Council on Thursday.

Jean-Pierre Lacroix, the Under-Secretary-General for Peacekeeping Operations, said that upcoming Presidential elections, set for 29 July, must lay the foundation for consolidating democracy in the west African country.

The priority, he underscored, must be for all actors to work hand in hand for an inclusive and constructive political dialogue, conducive to the peaceful resolution of disputes.

After the elections, the focus must be on implementing the institutional aspects of the 2015 Agreement on Peace and Reconciliation in Mali, added Mr. Lacroix.

“Parties must turn their attention to the strategic pillars of the Agreement dealing with long-term goals,” he said.

Turning to the UN integrated mission in the country, known by its French acronym, MINUSMA, and its recently-concluded operational review, Mr. Lacroix said the Secretary-General was recommending a shift in its focus, prioritization and implementation of MINUSMA’s mandated tasks to maximize its role in support of the agreement and in amplifying the peace process.

Given the critical juncture in which Mali found itself, added the head of UN peacekeeping operations, the mission would intensify its reporting and monitoring efforts, while cooperating closely with other security actors, including the Group of Five for the Sahel (G-5 Sahel) joint force, the Barkhane force and the European Union (EU) Training Mission in Mali.

Concluding, he said stronger support to the G-5 Sahel joint force – including predictable and sustainable financing – remained critical for reducing the risk during counter-terrorism operations.

♦ Receive daily updates directly in your inbox - Subscribe here to a topic.
♦ Download the UN News app for your iOS or Android devices.
mali|MINUSMA 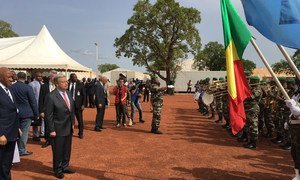