‘Much more’ can be done to raise awareness about the plight of persons with albinism: UN chief

UNICEF/Pirozzi
A child, who is blind and has albinism reads Braille at a primary school for children with disabilities in the town of Moshi, Kilimanjaro Region.
13 June 2018
Human Rights

On the international day to raise awareness on albinism – a rare genetic condition that results in the lack of melanin in the body – United Nations Secretary-General António Guterres has called for greater solidarity with people living with albinism, so they can live more empowered lives.

“Albinism is a genetic condition that affects people throughout the world, regardless of race, ethnicity or gender,” Mr. Guterres said on Wednesday.

“Yet, tragically, people with albinism continue to suffer widespread discrimination, stigma and social exclusion,” he added, stressing also the importance of enabling people with the condition to enjoy their full human rights.

In many countries, grossly erroneous beliefs and myths, heavily influenced by superstition, put the security and lives of persons with albinism at risk of constant violence and abuse; especially children and women, and other vulnerable groups.

In his message on the International Albinism Awareness Day, the UN chief also noted the endorsement of a regional action plan on albinism in Africa by the African Commission on Human and People’s Rights and by the Pan African Parliament, as “a key step forward.”

“But much more can be done globally to raise awareness about the plight of people with albinism,” urged Mr. Guterres.

The Secretary-General underscored the importance of the 2030 Agenda for Sustainable Development and the promise to “leave no one behind.”

He said the day was an opportunity “to declare solidarity with people with albinism and strive together so those who are often left furthest behind are able to live free from discrimination and fear, and empowered to enjoy their full human rights.”

The UN General Assembly designated 13 June as the International Albinism Awareness Day, in 2014.

The action by the General Assembly followed a resolution by the Human Rights Council – the highest UN intergovernmental body on human rights – that called for greater protection for persons with albinism against discrimination and violence. 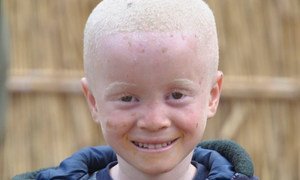 Welcoming a drop in the number of reported attacks against people with albinism, a United Nations human rights expert has concluded that this group of people in rural Tanzania continue to live in fear amid widespread attitudes that lead to violence against them.