This year’s United Nations annual debate over how best to battle HIV and AIDS heard that while progress had been made, it remains “uneven and fragile” with many hurdles still to come.

“But progress is uneven and fragile,” he added. “On all continents, key populations at higher risk of infection continue to be left further and further behind.”

Where prevalence is high, young women remain vulnerable; and youth need to learn how to protect themselves.

“Prevention is the key to breaking the cycle of HIV transmission,” he declared, pointing to the Prevention 2020 Road Map, which focuses explicitly on adolescent girls, young women and key populations at risk.

And the 2030 Agenda for Sustainable Development calls for an integrated approach in ending HIV, he added.

“Success will require us to strengthen links across these areas and build resilient and sustainable systems for health, underpinned by principles of human rights and equity,” said Mr. Guterres.

The UN chief pointed to September High-Level Meetings of the General Assembly on Tuberculosis (TB) and Non-Communicable Diseases as key opportunities to “inform a new way of thinking and working that moves beyond the disease-specific silos of yesterday.”

Looking ahead he also touted the 2019 High-Level Meeting on Universal Health Care as an occasion to build coherence across the global health landscape on financing, programming and accountability.

“At this pivotal moment, we must renew our focus and shared commitment to a world free of AIDS. The pandemic is not over, but it can be,” he continued.

“Let us move forward in a bold new spirit of partnership to overcome the cycle of HIV transmission and deliver health and well-being for all,” concluded the UN chief.

Noting that although there has been a 40 per cent decline in new infections between 2000 and 2016, President of the General Assembly, Miroslav Lajčák, emphasized that “we need to be clear: we cannot afford to slow down. HIV is, still, a huge challenge.”

“This virus still has a destructive – and deadly – impact on people around the world,” he added.

Flagging that in 2016, one million people lost their lives to AIDS-related illnesses, and that only 53 per cent of people have access to antiretroviral therapy, he said “that is why we have committed to ending the epidemic of AIDS, by 2030.”

He suggested exploring further opportunities for action, such as the 26 September high-level meeting on TB.

“People infected with HIV are 20 to 30 times more likely to develop active tuberculosis,” he explained “Without proper treatment, nearly all HIV-positive people, with tuberculosis, will die,” stated Mr. Lajčák.

Finally, he drew attention to the context around HIV and AIDS and the need for universal healthcare.

“We are not on an even playing field,” he explained. “Universal healthcare can help to give everyone a chance. It can level the field.”

Healthcare is crucial to sustainable development, which is why it has its own goal: SDG 3.

This will be on the General Assembly’s agenda, in 2019. And it could accelerate our drive, to eradicate AIDS, once and for all,” he said.

“Let’s speak up louder – in memory of those who have died, and in support of those who are living, with HIV and AIDS, today,” concluded the Assembly president. 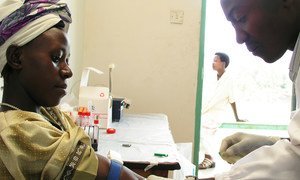