The summit between the leaders of the United States and the Democratic People’s Republic of Korea (DPRK) is “a promising development for global peace and security,” United Nations Secretary-General António Guterres said on Monday.

US President Donald Trump and his North Korean counterpart Kim Jong-un are due to meet in Singapore on Tuesday morning: the first-ever face-to-face encounter between a sitting US President and a North Korean leader.

As the UN chief stated, the world is watching.

“The two leaders are seeking to break out of the dangerous cycle that created so much concern last year,” Mr. Guterres told journalists at UN Headquarters in New York, referring to escalating tensions on the Korean Peninsula.

“Peace and verifiable denuclearization must remain the clear and shared goal.  As I wrote to both leaders last month, the road ahead will require cooperation, compromise and a common cause.”

Mr. Guterres added that UN agencies stand at the ready to support this process.

Among them are the International Atomic Energy Agency (IAEA), which works for the safe, secure and peaceful uses of nuclear science and technology.

He recalled that the agency has a mandate “to apply safeguards on all nuclear material in peaceful use, including all material removed from military programmes.”

Furthermore, the Comprehensive Nuclear-Test Ban Treaty Organization (CTBTO) could also play a role in monitoring the DPRK’s moratorium on nuclear tests, he added.

“I believe that this summit is an extremely important event,” said the UN chief, taking questions from reporters. “I believe the two leaders need to be credited for the courage with which they decided to move forward with the summit and to engage in a constructive negotiation to reach an objective that is vital for us all: the peaceful and verifiable denuclearization of North Korea,” he added.

13 November, 2017: The 193-member UN General Assembly adopted a resolution urging Member States to observe the ‘Olympic Truce’ throughout the 2018 Winter Games in the Republic of Korea, and expressed its expectation that “Pyeongchang 2018 will be a meaningful opportunity to foster an atmosphere of peace, development, tolerance and understanding on the Korean Peninsula and in Northeast Asia”.

5-8 December, 2017:  The then head of the UN’s Department of Political Affairs travelled to North Korea for talks with senior officials.  Jeffrey Feltman said he had stressed the international community’s commitment to a peaceful political solution to the situation on the Korean Peninsula. Speaking to reporters after returning to New York, he described the visit as “the most important mission I’ve ever undertaken,” adding that “we’ve left the door ajar, and I fervently hope that the door to a negotiated solution will now be opened wide.”

15 December, 2017: Council holds ministerial-level meeting on "Threats and Challenges posed the by the DPRK to International Peace and Security".

9 January, 2018: North and South Korean officials meet and agree the north will send athletes and delegates to the upcoming Winter Olympics across the border in Pyeongchang.

9 February, 2018: South and North march together during the opening of the Olympics. Secretary-General Guterres, who attended the Games, said that though the Olympic tradition of peace and cooperation was a global one, it had special resonance on the Korean Peninsula.

27 April, 2018: DPRK leader Kim Jong-un holds historic summit meeting with President Moon Jae-in of the Republic of Korea, on the border between the two countries, after the North says it has suspended nuclear and long-range missile tests, and plans to close its nuclear test sites.

May 10, 2018: President Trump first announces his intention to meet the North Korean leader, on June 12.

During his remarks to journalists on Monday, the Secretary-General also drew attention to the humanitarian situation in North Korea, where the UN estimates more than 10 million people, or 40 per cent of the population, require assistance.

Aid agencies are seeking $111 million to assist six million in need this year.

The funding will support operations in areas such as enhancing food security, reducing malnutrition, and increasing access to healthcare, water and sanitation services.

Communities will also receive help to become more resilient in the face of recurrent natural hazards such as droughts and floods.

Among the UN agencies active in the country are the World Food Programme (WFP): a presence for more than two decades.

The UN agency aims to assist 650,000 women and children there every month, who are being given dietary supplements in the form of fortified cereals and biscuits.

WFP Executive Director David Beasley was in North Korea last month to assess needs and evaluate operations on the ground.

Mr. Beasley visited several projects including a WFP-supported children’s nursery and a local factory where WFP produces the fortified biscuits for its programmes.

“There is a real need for continued humanitarian assistance, especially when it comes to meeting the nutritional needs of mothers and young children,” he said at the end of the four-day mission.

“I do believe that with hard work and support from around the world we’ll be able to make a difference.”

The latest report from the UN Office for the Coordination of Humanitarian Affairs (OCHA) on needs inside North Korea, published in April, says that there are "many complex, intertwined reasons" for the country's high rate of undernutrition.

It points out that only 17 per cent of land is good for cultivation in DPRK, and that households are having to increasingly rely on farmers' markets beyond the public food distribution system, involving bartering and swaps.

Most food is still produced on around 3,900 cooperative farms, with 100 State-run farms focussing on specialized food production.

The report concludes that humanitarian agencies have been making progress in meeting the needs of the most vulnerable, partly as a result of "growing confidence building with the Government and engagement with them on humanitarian operations". 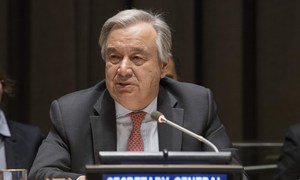 United Nations chief António Guterres has welcomed the Japan-China-South Korea summit held on Wednesday and their effort to cooperate in ridding the Korean Peninsula of nuclear weapons.

Following the announcement by the Democratic People’s Republic of Korea (DPRK) that it will end its nuclear and missile tests, United Nations chief António Guterres said on Saturday that the “path is open for the peaceful denuclearization of the Korean peninsula.”