“He calls for a full investigation into the attacks, especially allegations that there was also a second strike targeting first responders, to establish accountability,” said his spokesperson, Stéphane Dujarric, in a statement on Sunday.

Mr. Dujarric noted that the Secretary-General recalled that Idlib is part of the de-escalation agreement reached in Astana, and called on its guarantors “to uphold their commitments.”

The Astana talks process - led by Russia, Turkey and Iran together with the Syrian government and parties to the conflict - is separate from the UN-led peace talks which have been taking place mostly in Geneva.

“The Secretary-General underscores the precarious plight of the estimated 2.3 million people in Idlib governorate, 60 per cent of whom are civilians displaced by the conflict from other areas, most recently from Eastern Ghouta,” he continued.

Mr. Guterres calls for "an immediate cessation of hostilities and urges all stakeholders to respect their obligations under international humanitarian law, including the protection of civilians and civilian infrastructure,” the statement concluded. 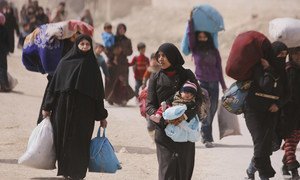 Less than 20 per cent of the “desperate” civilians living in Syria’s hard-to-reach areas have got the humanitarian aid they need so far this year, a senior United Nations official warned on Tuesday, calling for the Security Council to help ease their plight.