The United Nations Secretary-General, António Guterres, has called for more accountability for human traffickers in Libya, after the UN Security Council on Thursday added six individuals accused of leading smuggling and trafficking networks in the country, to its Sanctions List.

Those now subject to asset freezes, and a travel ban, under Council sanctions resolutions and measures relating to Libya, include the head of a regional coast guard unit in Libya, according to reports, as well as two Eritrean nationals.

The unprecedented sanctions against the leaders of trafficking networks, follow widespread international outrage at the end of last year, when the CNN television network broadcast pictures of migrants being auctioned off in a modern-day slave market, in the suburbs of the Libyan capital.

In a tweet on Friday, Mr. Guterres said that “we were all horrified by pictures of human beings for sale in Libya last year. I welcome the Security Council’s decision to sanction six traffickers and smugglers.”

“There must be accountability for exploitation and human rights abuses,” he added.

Libya has become a major conduit for human trafficking, especially from sub-Saharan Africa, since the overthrow of former leader, Muammar Gadaffi, in 2011, which saw the country descend into factional conflict, widespread instability and a humanitarian and economic crisis.

Figures from the African Union suggest that between 400,000 and 700,000 migrants were being held in often inhumane conditions, and subject to human rights abuses, in more than 40 detention camps across the country, as of last December.

We were all horrified by pictures of human beings for sale in Libya last year. I welcome the Security Council’s decision to sanction six traffickers and smugglers. There must be accountability for exploitation and human rights abuses.

The six men now subject to Security Council sanctions, are:

Mus’ab Abu-Quarin, described by the sanctions committee on Libya as “a central actor in human trafficking and migrant smuggling activities”, whose network covers “Libya, European destinations, (and) sub-Saharan countries for the recruitment of migrants and Arab countries for the financial sector.”

Mohammed Kachlaf, described as being head of a militia in the north-western coastal city of Zawiya, that controls an oil refinery there which is a “central hub of migrant smuggling operations.”

Abd Al Rahman Al-Milad, described as head of the regional coastguard unit in Zawiya “that is consistently linked with violence against migrants and other human smugglers.”

Ermias Ghermay, described as “one of the most important sub-Saharan actors in trafficking”, who is “leader of a transnational network responsible for trafficking and smuggling tens of thousands of migrants.”

Fitiwi Abdelrazak, who also leads a network responsible for trafficking and smuggling tens of thousands, according to the committee, identified sources in criminal investigations as “one of the top-level actors responsible for the exploitation and abuse of a large number of migrants in Libya.” He is also said to have accumulated “immense wealth” through people trafficking.

Ahmad Oumar Al-Dabbashi, described as commander of the Anas al-Dabbashi militia, currently active around Zawiya, who is a “significant leader in illicit activities related to the trafficking of migrants. The al-Dabbashi clan and militia also cultivate relationships with terrorist and violent extremist groups.”

UN Photo/Eskinder Debebe
Wide view of the Security Council meeting on the situation in Libya. 06 June 2018.

How do Security Council sanctions work?

Sanctions are meant to be a last resort when it comes to addressing massive human rights violations, curbing illegal smuggling or curbing extremism groups. Increasingly, sanctions are also being used to support peace efforts, to ensure that elections are held, or to demobilize armed groups.

This ability stems from the UN Charter. Under Article 41 of Chapter VII, the Council can use enforcement measures not including weapons, such as “complete or partial interruption of economic relations and of rail, sea, air, postal, telegraphic, radio, and other means of communication, and the severance of diplomatic relations.”

Sanctions Committees are subsidiary organs of the Security Council and are composed of all 15 of the Council’s members. Their role is to implement, monitor and provide recommendations to the Council on particular sanctions regimes. They meet regularly to consider reports from expert panels and to hold meetings with Member States, UN actors and international organizations. 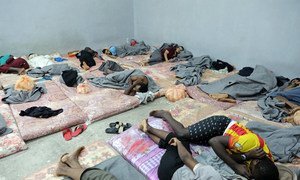 More than a dozen people have been killed or wounded by traffickers as they attempted to flee a detention centre in Libya last month, the UN refugee agency, UNHCR, said on Friday, describing it as the “latest horror story” to emerge from the war-torn country. 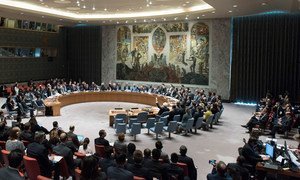 Counter-terrorism and non-proliferation are on the agenda today at the Security Council, where at least seven sanctions committees will brief the main United Nations body responsible for maintaining international peace and security. We’ve prepared a quick snapshot covering the basics of UN sanctions and how Sanctions Committees work.