From drought to floods in Somalia; displacement and hunger worsen, says UN

UN Photo/Ilyas Ahmed
The town of Belet Weyne in the Hiraan region of Somalia as seen from the air submerged in flood waters from the Shabelle river on 30 April 2018. Belet Weyne is currently experiencing its worst flooding ever and over 150,000 people have been displaced.
8 June 2018
Humanitarian Aid

After four consecutive poor rainy seasons that brought Somalia to the brink of famine, the country is now seeing near-record rainfall, and with it, flooding that has already displaced hundreds of thousands of people, the UN Children’s Fund (UNICEF) said on Friday.

According to the agency, about 230,000 people, over half of whom are estimated to be children, have been displaced since April due to flooding. They join around 2.6 million people across the country who have already been affected by drought and conflict.

“The rains signal the end of the drought for some areas of the country but they also sharpen the risks faced by acutely malnourished children, and particularly those who have been displaced,” Christophe Boulierac, UNICEF spokesperson, told reporters in Geneva.

The rains spread diseases that are particularly deadly for malnourished children whose immune systems are fragile and exhausted.

While there has not yet been a notable spike, the risk of further outbreaks is high and compounded by flooding, Mr. Boulierac said.

The flooding has also damaged water sources, sanitation facilities and other critical infrastructure, and 22 nutrition centres treating over 6,000 acutely malnourished children in areas hosting the displaced, have had to shut down.

Many of the flood-impacted areas are in the path of an ongoing measles outbreak, and a spike in acute watery diarrhoea, or cholera, is a major threat, he said.

Children displaced from their homes are most likely to be malnourished.

About half of children under 5 – more than 1.25 million – are expected to be acutely malnourished this year, including up to 232,000 children who could suffer the harshest form of malnutrition that requires specialized lifesaving care.

UNICEF is still $110.3 million short of the $154.9 million in funding needed to support relief programmes in Somalia.

♦ Receive daily updates directly in your inbox - Subscribe here to a topic.
♦ Download the UN News app for your iOS or Android devices.
Somalia|floods 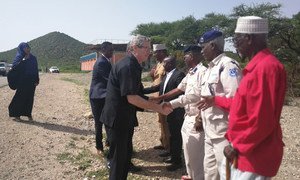 Following a visit to a cyclone-hit community in ‘Somaliland’, the United Nations has released close to $3 million to help people affected by an unprecedented storm which delivered a full year's worth of rain in just a few days, compounding damage caused by recent severe flooding.