Álvaro Navarro/Artículo 66
Thousands of Nicaraguans have protested since April. More than a hundred people have died in clashes with authorities.
1 June 2018
Human Rights

The United Nations has called on Nicaragua to allow access to the Organization’s human rights arm into the country amid reports that over 100 people have been killed and more than 1,000 injured in over six weeks of anti-Governments protests.

In a statement on Friday, Secretary-General António Guterres called on the Nicaraguan Government to “favourably consider” the requests of the Office of the UN High Commissioner for Human Rights (OHCHR) to visit the country.

“The UN is available to assist national dialogue efforts to strengthen the rule of law, respect for human rights and the peaceful resolution of differences,” read the statement.

Mr. Guterres also welcomed the recent announcement on the establishment of a Panel of Experts of the Inter-American Commission on Human Rights (IACHR) to investigate the violence.

According to OHCHR, the situation in the country was particularly concerning this week with reports that at least 16 people were killed – many allegedly shot by police and armed pro-Government groups.

The majority of the deaths are reported to have happened on Wednesday, 30 May – which was Mother’s Day in Nicaragua – when thousands of people took part in marches in the capital, Managua, and numerous towns across the country in support of mothers whose children had been killed during the demonstrations and to protest peacefully against the Government, said OHCHR spokesperson Liz Throssell.

“We urge the Nicaraguan authorities to carry out effective, prompt, independent, impartial and transparent investigations into all allegations of serious human rights violations that have occurred in the last few weeks,” she said.

“It is essential that those responsible for such serious human rights violations are held to account, and that victims and their relatives are accorded effective remedy, including equal and effective access to justice.”

There are also reports that, in the early hours of 30 May, the Nicaraguan army arrested and detained six human rights defenders near the country’s border with Costa Rica. Furthermore, journalists, students, and members of the Catholic Church and other groups have reportedly been subjected to death threats, violence and intimidation.

Calling for the prompt release the arrested human rights defenders, Ms. Throssell urged the Government to “publicly express” its support and respect for the work of rights defenders and to give clear instructions to the relevant authorities to prevent further aggression and intimidation.

She also underscored the need for the authorities to guarantee all legal safeguards, including access to lawyers, as well as to respect the absolute prohibition on torture and ill-treatment. 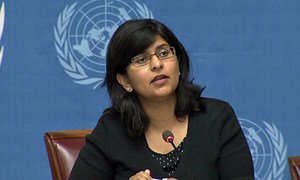 The United Nations human rights arm has called for investigations into all acts of violence in Nicaragua, where scores of people – the majority of them students – have been killed in protests that began in mid-April.