The United Nations needs to spend more time talking directly to young people across the world, beyond simply talking about their concerns, said the President of the General Assembly on Wednesday, opening a major Youth Dialogue event at UN Headquarters in New York.

“They still feel they are excluded, from the decisions that are affecting their lives," said Miroslav Lajčák,  adding that "we want this to be an event when we take a step back, and we listen to young people, talking to each other."

Quite often, he said,  "they have a feeling that when they speak, no one is listening”.

He added that the themes he was keen to hear their views on were education, jobs, and the complex issue of how young people could be dissuaded from taking a path towards violent extremism. "We talk about it, but we still don't really get it - don't really grasp it," he said.

Other speakers included an athelete from the Pacific island nation of Tonga, who won world reknown, when he marched shirtless into the opening ceremony of the Rio Olympic Games in 2016, carrying his country's flag.

“The world does not need violence, does not need bombs, the world needs today’s youth to become superheroes,” said Pita Taufatofua.

At the UN, wearing a shirt, he said his brother advised him to “keep your shirt on and leave the oil at home”.

The second piece of advice from his brother was, “tell your truth, leave the youth with something they can take into the future,” Mr. Taufatofua said.

One day as a child, he was coming home with his father, expecting that a superhero outfit was waiting for him at home. But there was nothing waiting for him. “That was my first experience of disappointment,” he said.

So what do people do when they get disappointed, he asked.

“They minimize their expectations of themselves because that’s how we reduce pain,” he said. “Unfortunately, with minimizing expectations of ourselves, we also minimize our potential to achieve our dreams and goals.”

The formula for becoming a superhero is to have the ability to deal with failures and pains and to dream big, he said.

He dreamt of becoming an Olympian when he was 12. That dream never left him. After 20 years of pain, his dream finally came true in Rio.

Now 34, he was one of the many speakers invited to today’s event, titled Youth Dialogue, which was held to bring the United Nations closer to young people.

(Check out our exclusive interview with Pita Taufatofua here)

The one-day event sought to highlight the ideas, needs and concerns of young people on education and employment, as well as how to prevent radicalization of youth.

Jayathma Wickramanayake, the UN Secretary-General’s Envoy on Youth, said most mainstream media appears to be “on a mission” to create an image of young people as a generation of careless or lazy individuals, who, if not managed well, could turn into a threat or burden to a country.

However, that is not the case, she argued: “If we are to realistically achieve the Sustainable Development Goals (SDGs), it is our generation who is going to do this. We are the SDG generation. The rest of the world can try, but they can’t, or won’t, make it without [us].”

Otherwise known as the Global Goals, the SDGs are a universal call to action to end poverty, protect the planet and ensure that all people enjoy peace and prosperity. 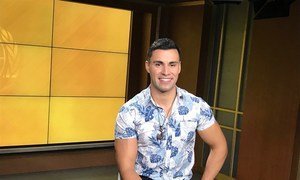 He is best known for his bare-chested appearances at the Rio and Pyeongchang Olympic Games, but Pita Taufatofua now wants to use his social media muscle to empower youth, and get them to share their stories.