Changing how countries across the world produce food is “fundamental” to protecting the future of the Earth’s ecosystem, said the head of the Food and Agriculture Organization (FAO) on Tuesday.

Addressing a three-day international dialogue on mainstreaming the key issue into agricultural policies and practices, he called for transformative changes in food production, aimed at producing healthy and nutritious food while simultaneously safeguarding the planet’s biodiversity.

“Biodiversity is essential for safeguarding global food security and nutrition, improving rural livelihoods, and enhancing the resilience of people and communities,” he said in keynote remarks.

However, planetary biodiversity — at the genetic, species and ecosystem levels — faces a number of threats, the FAO Director-General noted, adding that food production “is a big part of the problem”.

Pointing out that the world still produces food based mainly on 50-year-old principles, often using environmentally unfriendly chemicals, he also described how the loss of agricultural biodiversity poses a direct risk to food security.

“Only three staple crops — rice, maize and wheat — and three animal species — cattle, pigs and chicken — provide the majority of food energy intake in the world,” he said.

Diversifying food sources could play a critical role in ensuring food security; such as genetically diverse plants which are more tolerant to hotter and drier conditions, he said. Similarly, more diverse livestock would allow farmers and pastoralists to breed animals which could adapt to changing environmental conditions.

“This is especially important nowadays in the face of emerging challenges such as the impacts of climate change, rapid urbanization and also a growing population with changing diets,” Mr. Graziano da Silva said.

At the farm level, implementing production practices that prioritize safeguarding biodiversity can also ensure that food can be produced sustainably.

To that end, this week’s FAO conference gathers together people from across the whole sector, to consider real-world examples of how agriculture, fisheries and forestry have been successfully managed to safeguard biodiversity.

A series of working groups will also focus on avenues for mainstreaming biodiversity in agriculture, including global governance; national policies and legislation; financial incentives and investments; and supply chain measures. 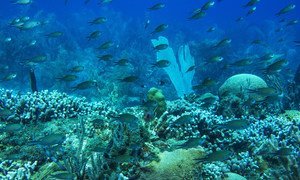 The welfare and prosperity of people now and in the future, depends on a “rich variety of life on earth” said United Nations Secretary-General António Guterres in his message for the International Day for Biological Diversity, marked on Tuesday.