ILO Photo
A participant at an ILO programme on mainstreaming gender equality through collective bargaining and agreements at the workplaces.

The head of the United Nations labour agency has called for a new spirit of cooperation and consensus between workers, employers and Governments, to end what he called the “new brutalism” of sexual harassment and violence in the workplace.

Informally dubbed the “world parliament of labour”, the Conference is the primary policy making body of the ILO. It is convened annually in the Swiss city, Geneva, and brings together more than 5,000 Government officials, worker representatives and employer delegates from the ILO’s 187 member States.

In his remarks, Mr. Ryder also warned against growing challenges in labour markets across the world, and to multilateralism in general, underlining that the ILO “must be a bulwark against such contagion.”

He also highlighted the need to secure workplaces from any forms of violence or harassment.

Action against sexual harassment must make the difference – ILO head

In particular, action that would really make a difference is needed, to end sexual harassment, said Mr. Ryder –  brought into sharp focus by the “Me Too” campaign.

“Our answer to the ever more vocal call for action must be ‘Us Too’,” he stressed.

The ILO chief unveiled his new report entitled “The Women at Work Initiative: The push for Equality”, which calls for innovative action to close the persistent gender gap.

He also unveiled new data on workers in the occupied Arab territories, reporting that they faced a grim situation overall.

In particular, women continue to be severely disadvantaged in the Palestinian labour market; finding it hard to access decent jobs, as well as facing gender-based discrimination. It also found that the population of the Gaza Strip continues to live through a “humanitarian and human-made” crisis with its economy depleted and the labour market crippled.

The opening day also saw Samir Murad, Minister of Labour of Jordan, elected President of the Conference over its duration from 28 May to 8 June. Jean-Jacques Elmiger (Governments) from Switzerland, Khalifa Khamis Mattar (Employers) from the United Arab Emirates and Akiko Gono (Workers) from Japan, were elected Vice-Presidents. 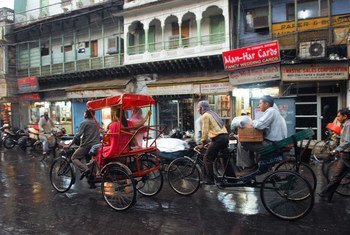 More than 61 per cent of the world’s employed population – two billion people – earn their livelihoods in the informal sector, the United Nations labour agency said on Monday, stressing that a transition to the formal economy is critical to ensure rights’ protection and decent working conditions.