UN Photo/Kibae Park
A train snakes its way through Seoul in the Republic of Korea.
23 May 2018
Human Rights

Despite being the world’s 11th largest economy, a significant number of South Koreans are living in “substandard” housing, faced with rising rents they can no longer afford, a United Nations rights expert said on Wednesday, noting that the country now leads developed nations in levels of household debt.

“I met with residents who are living in completely substandard housing and yet paying exorbitant rents,” said Leilani Farha, the UN Special Rapporteur on the right to adequate housing, at the end of a 10-day visit to the Republic of Korea.

In a statement on Wednesday, she said that some were “forced to live in tiny spaces no more than 5 square metres, on short term leases and at the mercy of landlords’ arbitrary decisions to raise the rent”.

While acknowledging the Government’s “massive effort” to improve housing conditions for the bulk of its population, she said she is “deeply concerned” by the continuation of “massive reconstruction projects” resulting in the destruction of neighbourhoods and displacement of individuals and families.

She also expressed alarm at how urban areas have become unaffordable for young people and low-income households; although that is an observation which has been made frequently about expanding cities in other developed countries such as London, Tokyo and New York.

Ms. Farha pointed out that the country’s current legal framework for urban redevelopment and reconstruction does not comply with internationally recognised human rights standards and continues to result in forced evictions.

She said that South Korea, formally known as the Republic of Korea, now leads the Organisation for Economic Co-operation and Development (OECD) list, in terms of household debt and “security of tenure is a real issue,” she added.

“The shift from housing being treated as a commodity to housing being understood as a human right, is not yet complete”, she said, adding that “The Government should adopt a comprehensive human rights-based national action plan on housing”.

♦ Receive daily updates directly in your inbox - Subscribe here to a topic.
♦ Download the UN News app for your iOS or Android devices.
Republic of Korea|housing 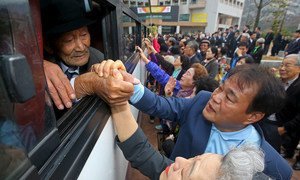 The proposed resumption of dialogue between the two Koreas is an opportunity to discuss and improve the human rights situation in the North, a United Nations expert has said at the end of his second visit to the South.