IOM Niger
Children in the migrant neighborhood of Niger’s Niamey, where many people are staying after being expelled from Algeria.
22 May 2018
Human Rights

Earlier this month, an OHCHR team visited several towns in neighbouring Niger where they interviewed 25 expelled migrants and other witnesses, who described how Algerian authorities had been carry out mass round-ups.

“What is particularly worrying is that most of the people we spoke to said that they were not subjected to individualized assessments” said Spokesperson Ravina Shamdasani, briefing journalists in Geneva on Tuesday, adding that “we were not informed of the reasons for their detention, nor were they allowed to pick up their belongings, passports or money before they were expelled.”

“Many had to leave behind everything they had,” she said, detailing roundups that had taken placed in the towns of Oran and Boufarik, as well as the Duira neighbourhood of Algiers, in March and April this year.

“Raids are reportedly carried out on construction sites in Algiers, as well as in neighbourhoods known to be populated by the migrants. Some also reported having been stopped in the street and detained,” she added.

While some were transferred rapidly to Niger, others were held in military bases and compounds, said OHCHR, where detention conditions were reported to be “inhuman and degrading”.

“From Tamanrasset, Nigeriens are transferred by bus to Agadez in Niger, while the others are crammed into big trucks to be transferred to the Nigerien border where they are abandoned and left to walk hours in the desert heat to cross the border into Niger,” said Ms. Shamdasani.

Migrants who remain, are fearful and concerns have also been raised that what appear to be organized expulsions could increase racism and xenophobia locally, against sub-Saharan Africans.

“The collective expulsion of migrants, without individual assessment or any due process guarantees, is deeply alarming and not in line with Algeria’s obligations under international human rights law, including the International Convention on the Protection of the Rights of All Migrant Workers and Members of Their Families, which Algeria has ratified.”

“We urge Algeria to implement the recommendations made by the Committee on Migrant Workers in April, including to explicitly prohibit collective expulsions and establish monitoring mechanisms to ensure that expulsions of migrant workers are carried out in strict compliance with international standards,” she continued.

“The Committee also called on Algeria to ensure respect for the right to seek asylum and the principle of non-refoulement,” referring to the practice of forcible return to migrants’ countries of origin, Ms. Shamdasani concluded.

♦ Receive daily updates directly in your inbox - Subscribe here to a topic.
♦ Download the UN News app for your iOS or Android devices.
Algeria|Migrants and refugees 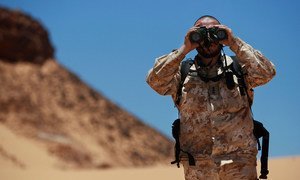 The Security Council on Friday extended the mandate of the United Nations peacekeeping mission in Western Sahara until 31 October 2018, calling for a “realistic, practicable and enduring” political solution to end the decades‑old conflict.