UNICEF/Ayberk Yurtsever
A child being administrated a dose of polio vaccination. Immunization programmes are a key element to strong health-care systems.
21 May 2018
Health

In a video message to the opening of the seventy-first session of the World Health Assembly in Geneva, Secretary-General António Guterres reiterated that the enjoyment of the highest attainable standard of health is a fundamental human right.

The World Health Assembly is the highest decision-making body of the World Health Organization, WHO. It determines the agency’s polices, supervises financial policies, and reviews and approves the proposed programme budget.

“Universal health coverage provides the foundation to help us overcome the inequities that continue to leave so many behind.”

Ensuring that everyone, everywhere has access to quality health care and services, is also vital for the achievement of the Sustainable Development Goals (SDGs), stressed the UN chief.

In particular, Sustainable Development Goal 3 (SDG 3), which has specific targets to ensure healthy lives and promote well-being at all stages in life. In addition, health improvements feature prominently in many of the other ambitious Goals.

Tedros Adhanom Ghebreyesus, WHO’s Director-General, also addressed the Assembly, emphasizing the importance of universal health coverage, as illustrated by the ongoing Ebola outbreak in the Democratic Republic of the Congo (DRC).

The WHO chief outlined a number of initiatives at the UN health agency to advance universal coverage and urged greater political commitment: “It’s clear that the twin messages of health security and universal health coverage resonate loudly with world leaders,” he said.

Mr. Tedros also highlighted critical upcoming events focussed on global health, including two high-level meetings; on non-communicable diseases and on tuberculosis at the upcoming session of the UN General Assembly which begins in September.

“We owe it to them to ensure that we do not waste the opportunities.”

Separately on Monday, WHO announced that the vaccination of health workers in areas of the DRC effected by the Ebola virus, has begun.

Together with the Government and partner organizations, WHO is also preparing to start a so-called ring vaccination programme, whereby the contacts of confirmed cases and the contacts of those contacts will be offered immunization, using the experimental drug.

“We need to act fast to stop the spread of Ebola by protecting people at risk of being infected with the Ebola virus, identifying and ending all transmission chains and ensuring that all patients have rapid access to safe, high-quality care,” said Peter Salama, the WHO Deputy Director-General for Emergency Preparedness and Response.

While the rVSV-ZEBOV Ebola vaccine is yet to be licensed, it was highly protective against Ebola in a major trial in 2015 in Guinea, said WHO.

Earlier results have been promising with the agency reporting that among the 5,837 people who received the vaccine, no positive cases were recorded nine days or more after vaccination. 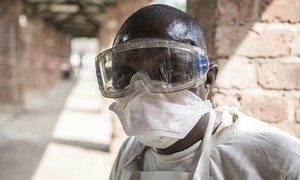