Photo/ICJ/Jeroen Bouman
A view of the Peace Palace, seat of the International Court of Justice (ICJ) in The Hague, Netherlands, 2005
17 May 2018
Peace and Security

The Security Council should act on behalf of the entire United Nations membership rather than prioritizing their own national interests, or those of close allies, international court judges said on Thursday, as the 15-member body debated how to effectively counter numerous threats to world peace.

“Against a backdrop of grave threats and growing turmoil in many regions, the unity of this body and the serious commitment of the entire international community will be crucial in preventing human suffering and defending our common humanity,” declared Maria Luiza Viotti, Chef de Cabinet, delivering a statement on behalf of UN Secretary‑General António Guterres.

She noted that the UN Charter does not rule out using any specific means of settling international disputes, leaving Member States free to choose from a range of different tools; including negotiation, enquiry, mediation, conciliation, arbitration and judicial settlement.

UN Photo/Evan Schneider
Andrzej Duda, the President of Poland, presides over a Security Council meeting on the maintenance of international peace and security as Maria Luiza Viotti, Chef de Cabinet, delivers a statement on behalf of UN Secretary‑General António Guterres on 17 May 2018.

Therefore, the Council could adopt a more open-minded approach, such as recommending that States settle disputes through special settlement mechanisms; a power it has rarely employed.

Where States agree to use the International Court of Justice, the Council should ensure that its judgment is properly observed, she said, calling on Member States to consider accepting the compulsory jurisdiction of the Court.

“International law is foundational to this Organization and the Security Council has a special role to play in ensuring that it is respected”, she said.

Also briefing the Council was Hisashi Owada, Senior Judge and President Emeritus of the International Court of Justice, who said that the crucial question is how the Council and the Court should work together to resolve disputes.

UN Photo/Manuel Elías
Hisashi Owada, Senior Judge and President Emeritus of the International Court of Justice, addresses the Security Council during a debate on the maintenance of international peace and security on 17 May 2018.

The Court’s legal opinion has helped to inform the Council on choosing a means of resolving disputes, as was the case in 1970, with legal resolution of South Africa’s continued presence in Namibia.

He said that the Council could seek the legal opinion of the Court on issues that often are at the root of the conflict; as it did following the Balkan wars of the 1990s, which led to the creation of the International Criminal Tribunal for the Former Yugoslavia.

To strengthen cooperation between the two bodies, he said, the Council could use its discretionary power more often to refer legal disputes to the Court, and consider making more use of the Court’s legal advisory function.

He noted that 15 of the 26 requests for advisory opinions came from the General Assembly, and the Council has sought out the Court only on a limited number of cases, such as Israel’s construction of a border fence in 2000 and Kosovo’s declaration of independence, in 2008.

Theodor Meron, President of the International Residual Mechanism for Criminal Tribunals, said that international criminal justice “is still very much in its infancy, and it is in a highly vulnerable stage of development at present.”

“International courts were never designed to try any more than a small number of alleged perpetrators,” he said, and officials in national jurisdictions must take on “the lion’s share of this work.”

Mr. Meron suggested the Council develop and adopt objective criteria to assess all credible allegations of international crimes, and serve the interests of the UN membership as a whole, rather than prioritizing their own interests or those of their strategic allies.

UN Photo/Evan Schneider
Theodor Meron, President of the International Residual Mechanism for Criminal Tribunals, addresses the Security Council during a debate on the maintenance of international peace and security on 17 May 2018.

He also encouraged the Council to simply refer possible violations of international law to appropriate judicial actors for further action, rather than being a gate-keeper and “risking becoming stymied in debates about whether or not egregious atrocities occurred in any particular situation or who might be responsible.”

Today’s debate was chaired by Andrzej Duda, the President of Poland, who urged States and the international community to reject the temptation to place force above law, and fear above trust.

“If we call an act of aggression a ‘conflict’, without properly defining the victim and the aggressor; if we call a threat a ‘challenge’ without defining the source of that threat… then we are helpless in terms of selecting legal steps to react,” he said.

♦ Receive daily updates directly in your inbox - Subscribe here to a topic.
♦ Download the UN News app for your iOS or Android devices.
security council|international law 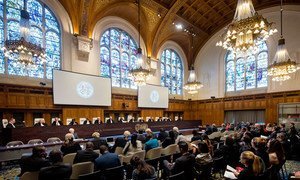 The International Court of Justice – the principal judicial organ of the United Nations – today issued a verdict, admitting an application submitted by Somalia, over the maritime delimitation between it and Kenya in the Indian Ocean.