Two truckloads of urgently needed medical supplies have been delivered to Gaza, where scores of Palestinians were injured during demonstrations along the border fence with Israel earlier this week.

The drugs and medical equipment delivered by the UN Children’s Fund (UNICEF) and partners, include antibiotics, saline solution and syringes to treat an estimated 70,000 people.

Over the past six weeks, Palestinians have been demonstrating against the decade-long blockade on Gaza, but Monday’s protests were the deadliest with nearly 60 killed and more than 1,300 injured.

UNICEF reported that medical facilities there are “buckling under the strain” of dealing with the additional casualties as the health system was already weakened due to shortages of fuel, medicine and equipment.

The agency added that the intensifying violence in Gaza has also worsened the plight of children “whose lives have already been unbearably difficult for many years”.

UNICEF said more than 1,000 children have been injured in violence since the start of the protests, and “many of these injuries are severe and potentially life-altering, including amputations”.

“Children should be protected, not targeted, used in violence or put in risky situations,” said the agency, and called on all actors within the occupied territories “to put in place specific measures to keep children out of harm’s way and avoid child casualties”.

Half of all children depend on humanitarian assistance in the Gaza Strip, and one in four, need psychosocial care. Families receive four to five hours of electricity each day and 90 per cent have no direct access to clean water.

♦ Receive daily updates directly in your inbox - Subscribe here to a topic.
♦ Download the UN News app for your iOS or Android devices.
humanitarian affairs|Middle East

‘Dire consequences’ for a million children in the Middle East, North Africa, as funding dwindles 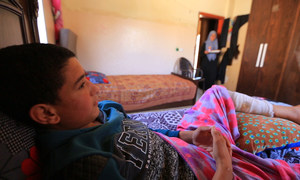 Medical teams inside Gaza are running out of supplies to cope with the wounded, following the deadliest day of protests against occupation along the border with Israel so far this year, UN aid agencies warned on Tuesday.