Dominic Chavez/World Bank
Daily life of residents living in Sujat Nagar slum in Dhaka, Bangladesh. Between 1990-94 and 2010-14, the Asia-Pacific region, on average, saw an increase in inequality by nearly 5 per cent points.
14 May 2018
SDGs

With concern growing that the divide between rich and poor is continuing to widen – especially in the Asia-Pacific region – top United Nations officials are calling for greater emphasis on growth that leads to fairer societies and a healthier planet.

In a video message to the opening of the 74th session of the Economic and Social Commission for Asia and the Pacific (ESCAP), UN Secretary-General António Guterres highlighted the potential offered by the region.

“The 2030 Agenda for Sustainable Development is our blueprint for success and the Asia-Pacific region can lead from the front.”

Also speaking at the opening, Miroslav Lajčák, the President of the UN General Assembly underscored that addressing inequalities is the core of the Sustainable Development Goals (SDGs).

“Not only does inequality have a whole goal dedicated to it, but it is also a driving force behind the entire 2030 Agenda,” he said.

Convened under the overarching theme of “Inequality in the era of the 2030 Agenda for Sustainable Development,” the Commission meets against the backdrop of increased global uncertainty over the benefits of globalization and rising economic protectionism – coupled with concern over climate change.

An opportunity to be seized together

According to ESCAP, the UN development arm in the Asia-Pacific region, in spite of progress across the region in improving access to basic services – inequality remains a major impediment.

Shamshad Akhtar, the Executive Secretary of ESCAP, said that overcoming the challenges would a profound impact.

“Collectively we have an opportunity to shape policies to reduce inequality, exploit frontier technologies and strengthen multilateralism for the benefit of all citizens across Asia and the Pacific,” she said.

“That is an opportunity, which together, we should seize.”

On its part, ESCAP has been working with Member States to promote balanced growth; strengthen social protection; reduce vulnerability to environmental shocks, and close the so called “digital divide” she added.

ESCAP Photo
Shamshad Akhtar, the Executive Secretary of ESCAP, speaks at the 74th session of the Commission, held in Bangkok in May 2018.

President of the Marshall Islands, Hilda C. Heine, who was elected chairperson of the 74th session of the Commission, underscored the importance of multilateral cooperation to translate the 2030 Agenda into success on the ground.

“As small island developing States we rely on our closest development partners, including ESCAP to support our efforts to translate the ambitious 2030 Agenda into tangible outcomes and actions, recognizing our unique challenges and vulnerabilities,” she said.

ESCAP is the largest of the UN regional commissions. Spanning a geographic area stretching from Russia to New Zealand and from Turkey to the tiny Pacific island of Kiribati, the region is home to almost two-thirds of the world’s population.

♦ Receive daily updates directly in your inbox - Subscribe here to a topic.
♦ Download the UN News app for your iOS or Android devices.
inequality|sustainable development 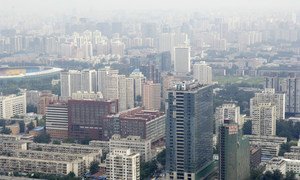 Economies in the Asia-Pacific region registered robust growth in 2017 and prospects for this year look promising, the United Nations development arm in the region said, urging countries to take advantage of positive conditions and address underlying vulnerabilities.