MONUSCO/Jesus Nzambi
During a previous Ebola outbreak in the DRC in 2014, UN and senior government officials evaluate the response to the disease (file)

The chances of the latest Ebola outbreak in the Democratic Republic of the Congo (DRC) spreading across borders are low, said the United Nations health agency on Friday, although nine neighbouring countries remain on alert.

Peter Salama, who leads the World Health Organization’s health emergencies programme said that WHO was preparing for all eventualities, speaking at a press conference in Geneva.

To date there have been 32 suspected cases in and around Bikoro in remote Equateur Province – close to the Congo River – two confirmed by laboratory testing. There are 18 probable cases and a dozen classified as “suspicious”, according to WHO.

“We have three healthcare workers infected, and one who is being reported as of yesterday, as having died,” said Deputy Director-General Salama, warning that those who take care of patients are at greater risk of being infected and could pass the virus to others.

Given the significant number of suspected probable and confirmed cases, “we are planning for all scenarios, including the worst-case scenario,” he added.

Two of the neighboring countries – the Central African Republic (CAR) and the Republic of Congo – have “a slightly higher level of risk” because of their river-based links to DRC, Mr. Salama said.

UN agencies on the ground

WHO is working closely with authorities in DRC to scale up operations rapidly and mobilize health partners that have helped in relatively recent Ebola outbreaks in West Africa: Liberia, Guinea and Sierra Leone.

As the affected communities are located in hard-to-reach areas, implementing an effective response will be dependent on ensuring access from the air and securing sufficient funding.

“It is absolutely a dire scene in terms of infrastructure. There are very few paved roads, very little electrification, very poor water and sanitation…the only way we mount a serious response in this outbreak is through an air-bridge,” Mr. Salama said.

WHO is in discussions with the World Food Programme (WFP) to organize airlifted supplies to the affected area, and to clear ground so that planes can land.

The UN Children’s Fund (UNICEF) has also mobilized doctors, sanitation and hygiene specialists, to help contain the spread of the disease.

WHO now has a team on the ground along with partner Médecins Sans Frontieres (MSF), and will invole an additional team of between 20-40 specialists in epidemiology, logistics, contact-tracing, and vaccination programmes, in the coming days.

Having already deployed personal protective equipment on the ground, WHO plans to have a mobile laboratory up and running by this weekend, following approval from the DRC’s Ministry of Health.

The initial focus will be on surveillance and understanding the extent of the outbreak; safe burials; case by case management; and preparing for any public health measures deemed necessary in terms of vaccination.

Mr. Salama emphasized that the vaccination operation for Ebola is far more complex than that for orally-administered polio vaccine. “This is a highly complex sophisticated operation in one of the most difficult terrains on earth,” he said.

“We know that coordinated early response will be critical containing this outbreak,” he said, after signing off on the spending from the UN’s emergency account, known as the Central Emergency Response Fund (CERF).

According to the World Health Organization, this is the DRC’s ninth outbreak, since the discovery of the Ebola virus in the country in 1976.

The virus is endemic to DRC, and causes an acute, serious illness which is often fatal if untreated. The virus is transmitted to human through contact with wild animals and can then be passed from person to person. Ebola is fatal in about 50 per cent of cases.

An outbreak in West Africa which began in 2014 left more than 11,000 dead across six countries, and was not declared officially over by WHO until the beginning of 2016.

First symptoms generally include the sudden onset of fever, fatigue, muscle pain, headache and sore throat. This is followed by vomiting, diarrhoea, rash, symptoms of impaired kidney and liver function, and in some cases, both internal and external bleeding. 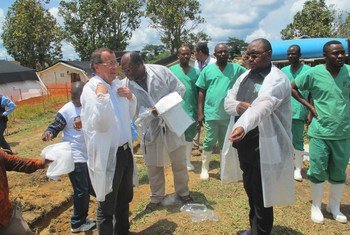 Two new cases of Ebola Virus Disease (EVD) have been confirmed in the Democratic Republic of the Congo (DRC) by Government scientists there, prompting the UN health agency to immediately scale up its response.