The United Nations chief has called for an immediate halt to all hostile acts and provocative actions to “avoid a new conflagration” in the Middle East, following reported exchanges of artillery fire over the Golan Heights.

According to media reports, the Israeli military attacked Iranian military installations in neighbouring Syria in retaliation for an Iranian-instigated rocket barrage on Israeli positions in the Golan.

Mr. Guterres “notes, with relief, today’s partial normalization of the situation,” and “urges for an immediate halt to all hostile acts and any provocative actions to avoid a new conflagration in the region already embroiled in terrible conflicts with immense suffering of civilians,” added the statement.

The Golan was captured by Israel in the 1967 Middle East war, and in 1974, a UN observer force was set up to monitor the ceasefire reached that year by Israel and Syria.

Mr. Dujarric noted that the UN Disengagement Observer Force (UNDOF) has maintained contact with forces of both sides during the latest hostilities and urged them to exercise “maximum restraint” and abide by their obligations under the 1974 agreement.

♦ Receive daily updates directly in your inbox - Subscribe here to a topic.
♦ Download the UN News app for your iOS or Android devices.
golan|UNDOF

Ban welcomes release of peacekeepers detained in Golan, appreciates assistance of Qatar, others 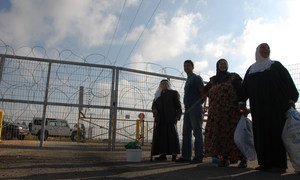 After 50 years of Israeli occupation, 'now is the time' to create Palestinian state – UN chief