Susan Smart/Wellcome Trust
UN Secretary-General António Guterres delivers his opening remarks to a round-table discussion on mental health in London on 2 May 2018.
3 May 2018
Health

Mental health remains one of the most neglected global health issues, even though it is critical to the achievement of the 2030 Sustainable Development Goals (SDGs) adopted by world leaders, top United Nations officials have said at an event in London.

“One in four people experience a mental health episode in their lifetime, but the issue remains largely neglected,” said UN Secretary-General António Guterres in his opening remarks to a roundtable discussion on mental health, co-organized by his office,  the World Health Organization (WHO), and the Wellcome Trust, a charitable foundation that supports scientists and researchers.

“The UN is committed to working with partners to promote full mental health and wellbeing for all,” Mr. Guterres added.

A main message coming out of the discussion was growing support for the notion that there can be “no health without mental health” and there is a need to look beyond the health sector, for creative solutions to tackle the root causes of deteriorating mental health.

Inadequate care does not come about in a vacuum, and there are societal as well as environmental factors involved, the roundtable heard.

Ms. Mohammed explained that mental health is not just an issue for the health sector because it also related to equality and basic individual rights. In this regard, she called for greater cross-sectoral investment to address the problem.

The event was held on the margins of the annual meeting of the UN Chief Executives Board (CEB) – one of the semi-annual meetings that brings together, under the chairmanship of the Secretary-General, the executive heads of 31 agencies and specialized UN organizations.

While in London, the UN chief met with United Kingdom Prime Minister Theresa May,  and recognized her country’s contribution to the global agenda, as “a founder of the UN, a permanent member of the Security Council and a pillar of multilateralism,” according to a read-out issued Wednesday by the world body.

“I think we are facing a serious threat of non-proliferation, nuclear [or] chemical [weapons], which is one of our main concerns,” Mr. Guterres said in the read-out. “And we are working hard, I think; the nuclear part looks promising but in the chemical part, there is a long way to go but we hope that it will lead to an effective resolution mechanism for accountability and we want to make sure there is no impunity.”

Inactivity puts physical and mental health of more than 1.4 billion adults at risk, says WHO 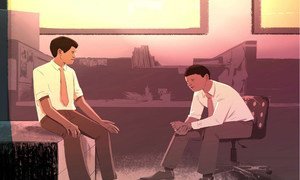 People spend a large proportion of time at work, where experiences there factor into their overall wellbeing, the United Nations said on World Mental Health Day, noting that depression and anxiety disorders are common mental disorders that have an impact on our ability to work, and to work productively.