MINUSCA Photo
Peacekeepers from the UN mission in the Central African Republic (MINUSCA) on patrol in the country's capital, Bangui. (file photo)
3 May 2018
Peace and Security

“There is no justification for incitement to violence or hate speech,” said the Secretary-General in a statement attributable to his spokesperson.

At least 22 people have been killed and over 100 injured in clashes, which erupted following the arrest of a member of a criminal group by CAR’s security forces.

In the ensuing violence, a church was attacked and a pastor killed. Two members of the UN Multidimensional Integrated Stabilization Mission in the country, known by its French acronym MINUSCA, were also wounded – one seriously – when they were pelted with stones by a crowd.

In the statement, the UN chief also called on the national authorities to investigate the attacks and promptly bring those responsible to justice.

He reaffirmed his support to the country and to MINUSCA’s role to protect civilians and stabilize the country.

The CAR has been plagued by decades of instability and fighting involving clashes between the mainly Muslim Séléka rebel coalition and mostly Christian anti-Balaka militia, which plunged the country into civil conflict in 2012.

A peace agreement was reached in January 2013, but rebels seized the capital, Bangui, in March of that year, forcing President François Bozizé to flee.

Concerned with the security, humanitarian, human rights and political crisis in the CAR and its regional implications, the Security Council authorized the deployment of  MINUSCA in 2014 with the protection of civilians as its utmost priority.

A transitional government has since been established and entrusted with restoring peace. The conflict, however, has taken on increasingly sectarian overtones as the anti-Balaka movement has taken up arms and inter-communal clashes have erupted sporadically in and around Bangui and elsewhere in the country. 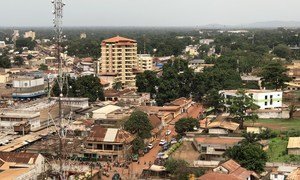 The United Nations peacekeeping mission in the Central African Republic (CAR) has appealed for calm following fresh violence in the capital Bangui which claimed the lives of several civilians, including a religious leader.