More than 140 million children are at greater risk of illness, hearing loss, blindness and even death globally if urgent action is not taken to provide them with life-saving vitamin A supplements, the United Nations Children’s Fund (UNICEF) has warned.

In a new report “Coverage at a Crossroads,” released on Monday, UNICEF stressed that just two doses of vitamin A per year, can save thousands of children’s lives.

Vitamin A boosts the immune system and can help protect young children from potentially fatal diseases like measles and diarrhea.

The World Health Organization (WHO) has classified vitamin A deficiency as “a public health problem” affecting about a third of all children aged 6 to 59 months - according to 2013 figures - with the highest rates registered in sub-Saharan Africa, at 48 per cent; and South Asia at 44 per cent.

The UNICEF report says only 64 per cent of children in need are receiving the life-saving benefits of vitamin A supplementation, leaving the remaining third, or more than 140 million children, without sufficient coverage.

The coverage of vitamin A supplement programmes dropped by more than half, in countries with the highest under-five mortality rates in 2016 – the countries where such programmes are needed the most.

As a result, the number of children left unprotected in high-mortality countries more than tripled between 2015 and 2016, jumping from 19 million to 62 million, the report notes.

Global coverage reached a six-year low in 2016, with the largest dip seen for West and Central Africa. On the contrary, targeting children in East Asia and the Pacific has proved effective, with more than 80 per cent of children there, receiving two-dose coverage over the past decade.

The report recommends that the global community incorporate vitamin A doses into other programmes to reach every child, strengthen monitoring to identify those yet to be reached, and expand knowledge overall concerning the most effective platforms.

♦ Receive daily updates directly in your inbox - Subscribe here to a topic.
♦ Download the UN News app for your iOS or Android devices.
Vitamin A 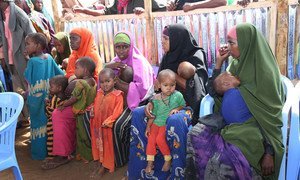 One million children aged six months to 10 years in Puntland and 4.2 million across Somalia were reached during a five-day measles campaign that wrapped up on Sunday, the United Nations has reported.