AMISOM/Tobin Jones
Troops of the Somali National Army and the African Union Mission in Somalia, line up in a convoy on the road leading up to the Al-Shabaab stronghold of Barawe.
28 April 2018
Peace and Security

The United Nations Mission in Somalia (UNSOM) has condemned the suicide bombing on Saturday that reportedly killed government security officers and civilians in the city of Gaalkacyo.

“This attack occurred because extremists feel threatened by the progress that is being made with reconciliation efforts in Gaalkacyo,” said the head of UNSOM, Michael Keating in a press statement.

“The country has suffered enough violence and bloodshed; it is time for reconciliation,” added Mr. Keating, who is also the UN Secretary-General’s Special Representative for Somalia.

According to initial reports, a suicide bomber detonated his explosives in an area of the city known as Jiiro Abdullahi Yusuf, where security forces were stationed, killing at least two senior security force commanders as well as civilians. Al-Shabaab has reportedly claimed responsibility.

“The people and authorities in Gaalkacyo are courageously finding a way forward; they should not be derailed by this assault on their chances of a peaceful future,” Mr. Keating said.

UNSOM expressed its condolences to the families and colleagues of the victims and wished the injured a full and speedy recovery.

The Puntland and Galmudug state administrations control the northern and southern sections of Gaalkacyo, in north-central Somalia, respectively.  This division has been a cause for recurring cycles of violence.

In January 2017, however, an agreement was reached by the Puntland and Galmudug state presidents. The accord stipulated a withdrawal of forces from the disputed city, the removal of all roadblocks to allow free movement of people and goods, and the introduction of joint police training and patrols. 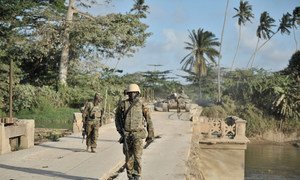 The United Nations Security Council on Wednesday strongly condemned the terrorist attack on 1 April perpetrated by the Al-Shabaab group against the Ugandan contingent of the African Union mission in Somalia.