‘Gaza is about to explode,’ UN envoy warns Security Council

UN Photo/Eskinder Debebe
Nickolay Mladenov, UN Special Coordinator for the Middle East Peace, briefs the Security Council meeting on the situation in the Middle East, including the Palestinian question.
26 April 2018
Peace and Security

The Palestinian-Israeli conflict is continuing with no prospects for a political resolution and “Gaza is about to explode,” a senior United Nations official said Thursday, urging both sides to avoid further clashes along the enclave’s border.

“Old wounds continue to bleed and deepen as we speak, risking the outbreak of another war,” Nikolay Mladenov, the UN Special Coordinator for the Middle East Peace Process, told the Security Council during an open debate on the crises affecting the region.

While his briefing covered the situations in Syria, Yemen and Lebanon, it was largely focused on the unfolding crisis along the Gaza fence, which is at the tiny enclave’s border with Israel.

For the last four weeks, tens of thousands of Palestinians in Gaza have converged on the fence to protest the long-standing blockade of the enclave.

The so-called ‘Great March of Return’ demonstrations are expected to continue and culminate around 15 May, and could spread to the West Bank and beyond, Mr. Mladenov said.

Since 30 March, during these demonstrations, 35 Palestinians have been killed and large numbers have been injured by Israeli security forces. No Israeli casualties have been reported, he added.

Israel has accused Hamas, Islamic Jihad and other militants of using the protests, women, children and the elderly, as a cover to infiltrate Israel and commit terrorist attacks.

The UN envoy urged Israel to calibrate its use of force and minimize the use of live fire, and called on Hamas – a Palestinian faction governing the enclave – and the leaders of the demonstrations to keep protestors away from the Gaza fence.

The combination of the security, development and humanitarian deterioration, coupled with the political impasse, makes Gaza “a powder keg,” Mr. Mladenov said, calling for action to prevent another war in the enclave, which was shaken by seven weeks of clashes in the summer of 2014 between Israeli forces and Palestinian militants.

He urged stepped-up efforts to support the parties in advancing a sustainable Israeli-Palestinian peace on the basis of the two-State solution, with Israel and Palestine co-existing peacefully as independent countries.

♦ Receive daily updates directly in your inbox - Subscribe here to a topic.
♦ Download the UN News app for your iOS or Android devices.
Gaza|Middle East 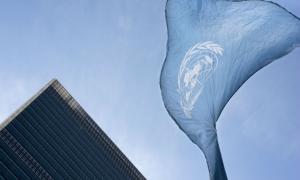 After last week’s deadly violence near the Gaza fence and with fresh protests planned at the Gaza-Israel border tomorrow, the United Nations has urged all parties to refrain from any act that could lead to further violence or place civilians – especially children – in harm’s way.