“This is first and foremost about enhancing our strategic coherence to support efforts by national governments and their people […] and enhancing support for inclusivity, particularly of those who are frequently marginalized and excluded,” the UN chief told the Security Council during a briefing on his report, Peacebuilding and Sustaining Peace.

Today’s Council briefing coincided with the UN General Assembly’s two-day meeting on the same topic. In the Assembly, world leaders have recognized that efforts to sustain peace are necessary not only once conflict breaks out but also long beforehand, through preventative measures like dialogue and mediation, and addressing root causes.

In April 2016, the General Assembly and the Security Council concurrently adopted what have become known as the ‘sustaining peace resolutions,’ which Mr. Guterres has said send a clear joint message: while Member States have primary responsibility for building and maintaining peace, “we can all do more to strengthen the foundations of stability, wellbeing and cohesion.”

The Secretary-General told the Council today that “building and sustaining peace requires addressing the roots of conflict, which often lie in poverty, exclusion, inequality, discrimination and serious violations of human rights,” adding that the human and financial cost of focusing on responding to crises was unsustainable.

“Prevention is the foundation of building and sustaining peace,” declared the UN chief, stressing that sustainable, inclusive development – deeply rooted in respect for all human rights – is the world’s best preventative tool against violent conflict and instability.

“The 2030 Agenda for Sustainable Development is our common global blueprint to tackle these root causes and create more peaceful, stable and resilient societies, founded on a fair globalization,” he said.

Calling for smarter investment in UN peacekeeping missions, he noted that his report also set out several options to increase, restructure and better prioritize funding dedicated to peacebuilding activities.

He reiterated his call for a “quantum leap” in Member States’ support for the UN Peacebuilding Fund, concluding that – following the General Assembly’s imminent adoption of a resolution outlining the joint path forward – “now it is time for action.”

Also briefing the Council, Dan NecuIÿescu, of Romania, Chair of the UN Peacebuilding Commission, reflected on that body's role in fostering coherence at the intergovernmental level in the Sahel, Liberia and the Gambia, which in turn allowed the UN to be “more valuable, strategic and effective in the field – where it matters.”

Smail Chergui, Commissioner for Peace and Security of the African Union (AU), spotlighted the implementation of an AU Post-Conflict Reconstruction and Development Policy, which employs both preventative and stabilization dimensions. He also described the AU’ss quick-impact and peace-strengthening projects and work it carries out through its various liaison offices.

Citing critical lessons learned in the AU’s work, he said there is an urgent need to strengthen cooperation in prevention, which remains the most cost-effective, but least-resourced, tool.

There is also a need to shift towards a more people-centred paradigm, with a specific focus on peace dividends, especially for women and girls, he said, also stressing that “local perspectives must be incorporated and marginalized communities must be empowered.” 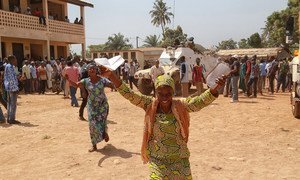 ‘Instead of responding to crises, we need to invest far more in prevention,’ says UN chief

The imbalance between spending on conflict, and spending on peace, must be tackled head-on, Secretary-General António Guterres said Monday, urging the United Nations to rally all international actors “for our efforts across the peace continuum – from prevention, conflict resolution and peacekeeping to peacebuilding and sustainable long-term development.”