UNHCR/Gordon Welters
Nastaran Fekri (left) and Rita Butmann (striped shirt) teach a workshop class at the ReDI school in Berlin. Set up for refugees without computer access at home, the school’s three-month course in coding takes students with basic skills to the point where they can build their own online store
24 April 2018
Migrants and Refugees

A newly-launched action plan that encourages employers to expand job opportunities for refugees aims to be a “win-win situation” for both sides, as well as host communities, according to a senior United Nations official.

Launched on Tuesday by the UN refugee agency and the 35-member Organisation for Economic Co-operation and Development (OECD), the plan identifies challenges to integrating refugees into the labour market, but also lists concrete actions to boost their participation.

Volker Türk, the UN  agency’s Assistant High Commissioner for Protection, said it supports a “new approach” where refugees are included in communities from the very start and ultimately contribute to local economies.

“This Action Plan shows the way forward to ensure that the economic potential of refugees is fully harnessed, contributing to their social integration and offering a win-win situation to refugees, employers and host communities,” he said.

Refugees account for 22.5 million of the more than 65 million people worldwide who have been forcibly displaced from their homes.

The Office of the UN High Commissioner for Refugees (UNHCR) interviews with refugees found employment and housing as their top concerns, with most saying having a job makes them feel integrated into their new communities.

While receiving countries face major challenges with refugee integration, both in the economy and society, the partners behind the plan believe “refugees also represent a significant opportunity for the host country, given the many skills and aptitudes that they bring.”

The Action Plan was based on extensive consultations with employers, trade unions, civil society organizations and others.

It lays out 10 recommendations, such as taking stock of refugees’ skills, identifying possible gaps and matching “refugee talent” with employers’ needs.

Navigating administrative rules and regulations covering refugees is another area, with public authorities and employment services encouraged to streamline procedures for work permits and other necessary documents.

Employers are also encouraged to make the business case for hiring refugees, for example for jobs that have been difficult to fill.

“Harnessing the full potential of refugees in receiving economies and societies requires a whole of government approach in close partnership with the civil society,” said Stefano Scarpetta, OECD’s Director for Employment, Labour and Social Affairs.

“Employers can and should play a central role in this process, but need to be supported by sound policy and actions from other stakeholders, including at the local level. Together we can make the most of refugee skills, talent and potentials.” 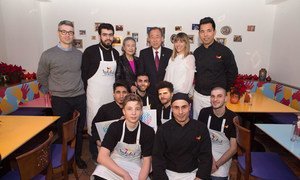 During his trip to Vienna, United Nations Secretary-General Ban Ki-moon today visited a restaurant where refugees work together with locals to serve Austrian-Arab fusion cuisine, using this opportunity to showcase the UN system-wide initiative to counter xenophobia launched in September.