A view of Kabul, the centre of Afghanistan’s social and political life. Photo UNAMA/Fardin Waezi.
22 April 2018
Peace and Security

A suicide attack on a voter-registration centre in the Afghan capital Kabul which left at least 30 dead on Sunday, has been condemned by the United Nations mission in the country, UNAMA.

“The UN family in Afghanistan feels a deep sense of revulsion at today’s outrage,” said the Head of the Mission, Tadamichi Yamamoto, adding that “the killing appears to be part of a wholly unacceptable effort by extremists to deter Afghan citizens from carrying out their constitutional right to take part in elections.”

Sunday’s attack took place when a suicide bomber wearing an explosive belt, blew themselves up near the election facility in the west of Kabul – an area mostly populated by Shi’ite Muslims, according to UNAMA.

The UN Secretary-General António Guterres strongly condemned the attack and said that those responsible must "swiftly be brought to justice."

"They must not be allowed to suceed in deterring Afghan citizens from carrying out their constitutional right to take part in forthcoming elections," he added.

Mr. Yamamoto expressed his deep condolences to the family and victims, and wished the injured a speedy recovery.

News reports said that the Islamic State of Iraq and the Levan (ISIL) extremist group had claimed responsibility for the bombing, and many women and children are believed to be among the victims.

UNAMA said that since then, “there have been a number of violent incidents around the country against the centres where citizens are required to sign up for the upcoming ballot.”

Two police officers were shot and killed by armed assailants at a registration place in the city of Jalalabad on Thursday, and gunmen also torched a centre in Ghor; abducting electoral and security officials.

They were released the following day.

♦ Receive daily updates directly in your inbox - Subscribe here to a topic.
♦ Download the UN News app for your iOS or Android devices.
UN Assistance Mission in Afghanistan|Tadamichi Yamamoto|Kabul 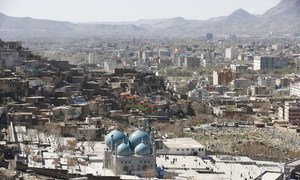 The United Nations strongly condemned the deadly attack earlier Wednesday in the Afghan capital, Kabul, near a major religious shrine where people had gathered to celebrate Nowruz – the traditional New Year and the arrival of spring. 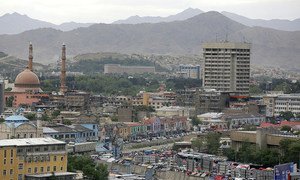 The United Nations mission in Afghanistan on Wednesday welcomed the Government’s renewed call for unconditional peace talks with the Taliban and expressed strong support for its vision for peace.